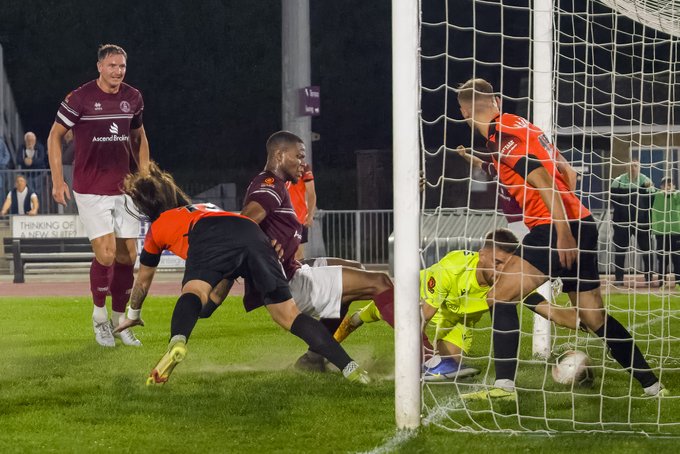 Chelmsford City continued their impressive start to the season with a last-gasp winner against Oxford City on Monday night at the Melbourne Stadium. It was a game where both teams felt like they should have won it but a combination of missed opportunities and inspired goalkeeping kept the score 0-0 until the last moments. However an in-swinging corner in the 90th minute caused havoc in the Oxford box and Ade Oluwo bundled home the winner to produce scenes of celebration in the home end.

Chelmsford City had not had a game for 9 days so Robbie Simpson had some players back fit for the game. Cameron James came in at right-back and Henry Ochieng moved back into a more familiar midfield position. Khale Da Costa started for the first time in 5 games and he replaced Simeon Jackson in the other change from the defeat against Havant. On the bench Cambridge United loanee Kai Yearn took his place having signed just before the game. Jazzi Barnum-Bobb also returned from injury to take a place among the substitutes. Young striker Anisius Lewis who had made the bench for the past couple of games had joined Hullbridge Sports on loan.

Charlie Ruff, who has settled into the side in recent games created the first chance of the game in the opening 5 minutes. He chipped a ball through for Harry Lodovica, and when his shot was blocked, Henry Ochieng found Lodovica again but his backheeled effort was cleared off the line by Hoops defender Tom Harrison. The majority of the first 20 minutes was played in Oxford’s half and Ruff created a better chance for Lodovica with an exquisite through-ball but the striker placed his effort wide when well placed to score. Lodovica had another chance to score, this time with his head, but his effort was straight at visiting keeper Ben Dudzinski.

Oxford, after riding the early moments, took charge of the game for the second half of the first half of the game. Former Gillingham forward Josh Parker, signed by Oxford City on the day of the game, hit a shot into the side netting and from the resulting corner Lewis Coyle hit a rasping drive just wide of Ejeheri’s goal. Chelmsford then became a bit sloppy in possession of the football and Cameron James almost let Parker in again but his shot went way over the bar. Also tall striker Klaidi Lolos was causing problems and he was denied first by a Dave Winfield block and then moments later Ovie Ejeheri dived to his left to stop a goalbound shot from the Greek striker. Charlie Ruff had the next best chance but he fired over when a corner dropped to him and an even first period came to a close with no score on the board.

The second half of the match was more of a scrappy affair with fouls breaking up the rhythm of the game. Firstly Lewis Coyle was extremely lucky to escape a card for a heavy tackle on Tom Blackwell, meaning that Khale Da Costa’s kick on Tom Harrison similarly went unpunished as the referee set a high bar. Ovie Ejeheri was continuing his impressive night between the sticks and he was called into action when after a lovely 1-2 between McEachran and Ashby, the latter’s rising drive was well tipped over by the Arsenal loanee keeper.

The introduction of Yearn just before just before the hour changed the game in Chelmsford’s favour. Firstly his shot from the edge of the area looped over the bar, then after his initial effort was deflected, the teenage midfielder’s strike was always rising over. It was the sort of spark that City needed after a slow start to the second period. Both managers tinkered with personnel and formation throughout the night but the game continued to be goalless well into the second half.

Chelmsford had the next good chance when a cross by Eduino Vaz was headed straight at Dudzinski by Liam Trotter, still looking for his first Clarets goal. Teenage sub forward Gerald Muchechetere had a decent chance at the near post for Oxford but his effort was saved comfortably enough by Ejeheri. Oxford were beaten in their last Vanarama National League South fixture 1-0 late on and the same fate would be bestowed upon them again.

After impressive full-back Aaron Williams-Bushell conceded a corner under pressure from Chelmsford sub Simeon Jackson, Kai Yearn’s inswinging corner was nodded on at the near post by Jackson and Ade Oluwo under pressure from Oxford defenders bundled the ball just over the line before Dudzinski could clear it away. It was Oluwo’s first goal since the home draw against Tonbridge in April and just his 4th goal for City, all scored at Melbourne, but the first in a winning effort for the Clarets. This sparked wild celebrations in the home end with Oluwo and Ruff jumping into the crowd. The game ended a few minutes later and Chelmsford were back to winning ways and it condemned Oxford to their 3rd consecutive league defeat, and also their third game in a row without a goal.

Man of the Match: Ruff 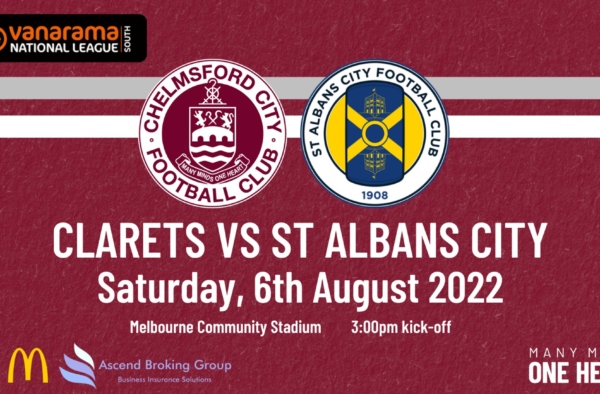 Ticket details and supporter information for the visit of St Albans City in the Vanarama National League South. Tickets… 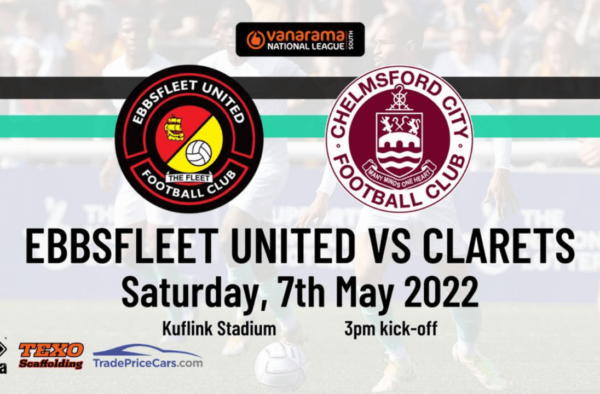 Ticket details for our away trip to face Ebbsfleet United in the Vanarama National League South. The kick-off at…