It was a very different look Clarets side that started the game out to the one against Redditch United on Saturday 19th in the Isuzu FA Trophy Second Round, but they really took the game to the hosts and dominated affairs throughout.

It was a relatively slow start to affairs at Burroughs Park as both teams looked to grow into the game and claim an early foothold but it were the Clarets who established themselves on top constantly looking to probe at the Great Wakering Rovers defence. Loanee Kai Yearn looked bright as he gave a real creative spark to the Clarets as he looked to fashion some early chances for the strike partnership of Harry Lodovica and Anisius Lewis.

The chances kept coming for the Clarets and it was that man Kai Yearn’s deliveries who were asking all sorts of questions of the Rovers’ defence as the Clarets looked to capitalise on a spell of set-pieces. They kept the pressure on the hosts and Yearn forced Fairs into a smart save in the Rovers’ net after the hosts failed to clear a corner.

It was another set-piece that almost gave the Clarets the breakthrough, on the 22nd minute. Yearn’s delivery found Simpson who nodded his header down towards Lodovica. The ball bounced off the Striker’s knee and just over the bar. At this point in the game, the momentum very much with the Clarets. Badjana looked to create from midfield but was unable to capitalise fully on a couple of opportunities for the Clarets to counter at the GWR defence after they had made their way forward.

Another chance fell the direction of Robbie Simpson after a goalmouth scramble was put back out wide and a cross swung towards the Simpson whose effort at goal was matched by Fairs to keep the game goalless.

Simpson made the breakthrough on 41 minutes in a goal that felt like it had been brewing all game for the Clarets number 14! Wilkes put the ball in the box that was met well by Lodovica who crashed his effort off the underside of the bar straight to none other than Robbie Simpson who finished and gave the Clarets the lead just before the break.

The hosts had a chance in the dying embers of the first half, a freekick struck against the wall, landed back with the hosts who had another opportunity to strike at goal. Marsden, the skipper for the night, made a smart save in what was pretty much the last action of the first half.

The Clarets started the second half the stronger of the two sides, having the ball in the net just 4 minutes into the second half through debutant Lewis only for the linesman’s flag to rule the goal out. Lewis would be involved again, on 56 minutes, with another fantastic opportunity, but GWR keeper Fairs was equal to it and made the save.

Yearn fashioned himself a chance just before the hour with an excellent piece of play, flicking the ball over his shoulder and striking at goal. The ball deflected behind for a corner. From the corner the Clarets would again cause problems but were unable to make the most of the chance.

The hosts would have a few opportunities through substitute Eusebio Da Silva who looked to probe the Clarets backline. He was unable to make the most of these opportunities and the defence dealt with the threat that the sub imposed.

Just after a Clarets double substitution on the hour, with Lewis and Ochieng withdrawn to be replaced by Jackson and Blackwell, the Clarets struck the bar with an effort and just a minute later Jackson went through on goal, but Fairs was able to pull off the save.

Three minutes later, Lodovica made it two, after some great link-up play with Blackwell. On the 66th minute the Clarets’ sub flashed a ball across goal that found the number 9 who finished his chance to double the Clarets’ lead! Minutes later Lodovica would have an opportunity for his second and City’s third after he met a ball into the box but was unable to keep his effort under the bar. The two substitutes and Lodovica would link up again with the latter calling Fairs into action as we entered the last 15 minutes of the tie.

Neither team fashioned many clear and obvious chances as the game ticked into added time before being drawn to a close by the referee as the Clarets marched on into the Fourth Round of the BBC Essex Senior Cup. A very well rounded and dominant performance from the Clarets giving the opportunity for more minutes in the legs and a chance for some of the younger players to showcase what they are about. 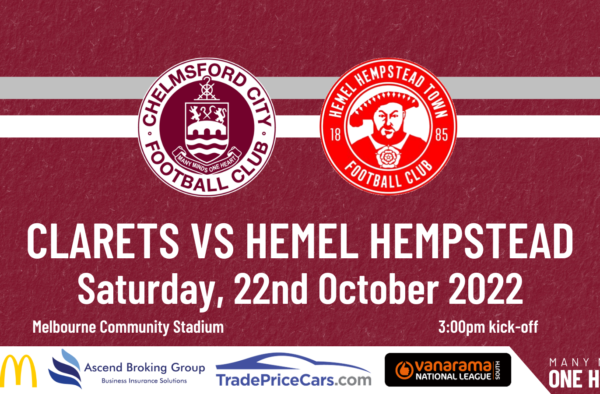 Ticket details for the visit of Hemel in the Vanarama National League South.   Tickets are now available to be… 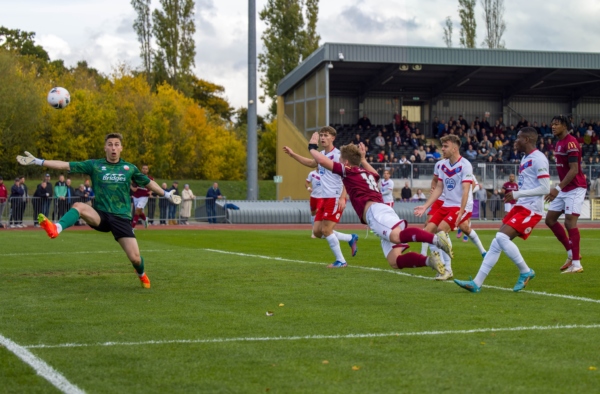