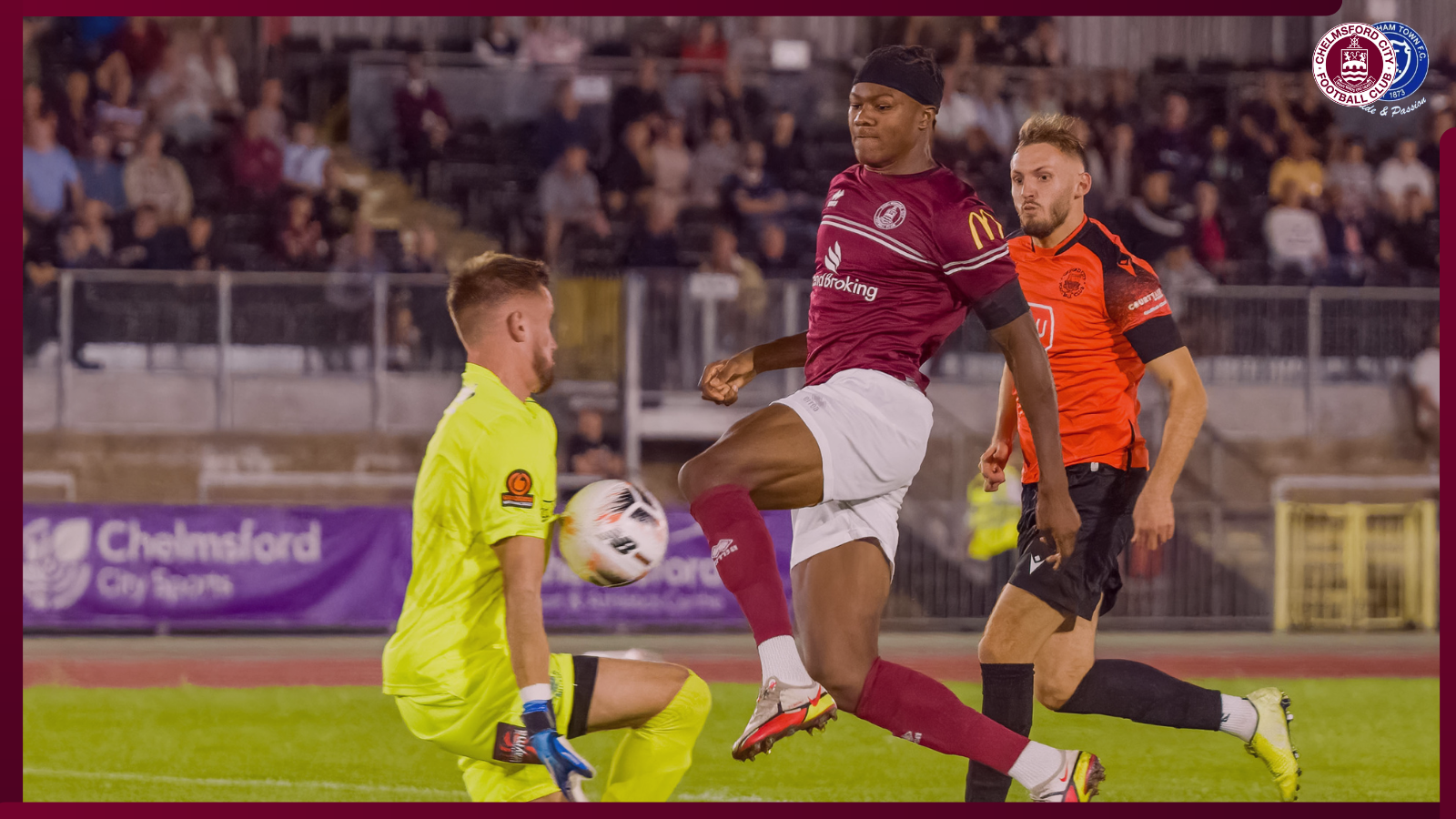 Chelmsford resumed league action after progressing in the FA Trophy with the visit of struggling Chippenham Town. The high-flying Clarets were derailed as a strong performance from Gary Horgan’s travelling Bluebirds gave them the three points. Chelmsford was not at the races today after the highs of midweek, they seemingly crashed down and fell to a poor defeat. They’ll be hoping to bounce back against strugglers of the Isthmian League North, Coggeshall Town, on Monday in the Essex Senior Cup.

After a solid display midweek, a few changes were made to the Clarets’ starting line-up. Captain Dave Winfield returned to the starting eleven, seeing Simeon Jackson hand over the armband and continue his duties as vice-captain. Elsewhere, the on fire Reece Grant was back in, with 2 goal in his first 2 appearances for the Clarets. He replaced Callum Jones who scored against Wealdstone, on only his first start since August. Elsewhere, Freddie Hockey dropped out. Players such as Frankie Terry and Tom Blackwell looked to continue their fine festive form and carry it on further into January. Both Cameron James and Arjanit Krasniqi returned to the squad, featuring on the bench alongside Jamie Yila, who is back from his 3 game suspension.

The hosts got us underway at Melbourne Stadium where the weather had put a gloom over the ground but not to Chelmsford’s start, as they were on top but could not amass anything in the early moments of the game. It was Chippenham who had the first effort of the game as Tom Mehew got himself an opportunity to shoot from the edge of the box but firing over the bar. The Bluebirds came forward again and Alex Bray put a great effort towards goal which needed tipping round to post by Ovie Ejeheri. Chelmsford did come forward for the first time after a great ball by Frankie Terry met the foot of Blackwell who brought it down and attempted to find Lodovica, but came to nothing. A well worked Chippenham free kick was cleared behind by Dave Winfield and lead to a corner routine, cleared by the Clarets. Chippenham’s fast start continued as they dominated the first 20 minutes. Leighton Tuodolo gave Chelmsford a good opportunity with a foul on Blackwell. He delivered the free kick in and the ball was ruined by a gust of wind, resulting in Chippenham clearing.

In the 26th minute Chelmsford launched an excellent counterattack. Lodovica chested the ball down and muscled off his marker to send Blackwell on his was. Spencer Hamilton was across and gave Chelmsford a corner. The resultant corner was headed towards goal 5 times by multiple players, with none making their way in to the net. The Clarets started to grow into the game, after the away side had started rather strongly, something the form book would not have predicted. At the half hour mark, the form book went out the window as Joe Hanks got some space on the edge of the box and arrowed his effort straight into the top corner. The travelling Chippenham fans celebrated as the relegation-threatened side took the lead. Chelmsford looked to answer back as less than 2 minute later, Tom Blackwell floated the ball in and Reece Grant brought it down and had his effort deflect wide. The resulting corner brought the Clarets a penalty as there was an altercation in the box, seeing a Chelmsford player dragged to the ground. Simeon Jackson stepped up and crashed his effort off the post seeing the score stay level. The Bluebirds keeper read it well but, on target Simeon’s shot would have more than likely nestled in to the bottom corner.

Chelmsford did get another great chance, seeing Liam Trotter send Tom Blackwell through but his attempted effort was blocked well and fell into the hands of Will Henry. Chelmsford continued to try break Chippenham down, but nothing could come from their attacks. The rain crashed down at Melbourne as 5 minutes were added on to the first half, the first chance in added time evaded both Will Henry and Spencer Hamilton and fell almost on the line. Neither Simeon Jackson or Harry Lodovica could turn it goalward with it being cleared before anyone got another chance. The final chance of the half fell to the Clarets as Liam Trotter was bundled over getting Chelmsford a free kick which was whipped excellently by Tom Blackwell and headed towards goal by Simeon Jackson but a worldie of a save by Will Henry kept the Bluebirds in the league. Richie Watkins then brought the half to an end as Chippenham stayed infront.

Chippenham looked to continue their solid performance as they kicked off the second half. The first chance fell to Alefe Santos found Tom Mehew, whose cross was caught easily by Ovie Ejeheri. Chippenham’s fast start was cut short as the Clarets came forward. After multiple attempts Jazzi Barnum-Bobb’s cross did find a Claret head but Will Henry kept strong and held well. Chippenham regained control with a corner from Santos being swung in and Will Richards in acres of space headed a ferocious header wide of the goal, at threat to no one. Chelmsford did come forward, just after the 55th minute as it went through to Simeon Jackson whose effort was superbly blocked and went for a corner. The corner was delivered by Eduino Vaz but dealt with as the ball went out for a goal kick. Robbie Simpson then turned to the bench. Callum Jones came on for Simeon Jackson and Arjanit Krasniqi made his home debut for the Clarets, replacing Henry Ochieng. Chelmsford so nearly fell 2 goal down as Chippenham broke very well and got a golden chance in the six yard box, only for Frankie Terry to throw himself in front of it and stop the goal being scored. Another great chance saw Harry Parsons tiptoe his way through 4 Chelmsford players and look to slot it in, only for Ovie Ejeheri to make a world class save.

Chelmsford continue to waste chances, attempting to play long which was no threat for the Bluebirds as Richards and Hamilton kept up their good form. The conditions did not help with Chelmsford trying to go on the ground, but the ball just skidding away evading the likes of Blackwell and Reece Grant. The best chance looked to fall to Callum Jones after Harry Lodovica flicked on excellently but Will Henry was up to the task and managed to clear long. Reece Grant found his way into the book after 30 minutes of the second half. He seemed to touch Chippenham’s center back after shutting him down, but despite no real contact, the referee deemed it to be worth a booking. The second half frustration continued for the Clarets and was nearly made worse as the ball found its way over to Joe Hanks who smashed his effort wide, not needing the hands of Ejeheri to tip it wide. Chelmsford looked to bombard the Chippenham goal and won another which was delivered by Blackwell and came back out to him. Chippenham won back and countered by Harry Parsons ended up giving away a foul. Harry Lodovica made way in the 84th minute, seeing the return of Jamie Yila who has been unavailable since his red card away to Dulwich Hamlet.

Yila was involved straight away, linking up well with Krasniqi and seeing Chelmsford win a corner, yet again. Eduino Vaz went across to take and delivered well, only to see Dave Winfield’s header go over the bar. With 3 minutes to go, Liam Trotter worked his way in to the book after Luke Russe fell next to him but stilling winning the header. Chelmsford did finally get a bit of luck as the ball cannoned off Reece Grant finding Jamie Yila who span well but could only find Will Henry’s hands. With the 90 minutes up, the referee indicated 5 minutes were added on, despite the ball barely being in play throughout the half. In the early stages of added time, Jamie Yila did well and beat his man, finding Tom Blackwell. Tom attempted the spectacular but sadly for all, sent his Bicycle kick high and wide of the goal. The football tennis continued as the ball went back and forth between defenders and the game ultimately came to an end as another Chippenham defender threw himself to the ground and the free kick led to the final whistle. Chelmsford fell to a 1-0 lose against one of the struggles in the Vanarama National League South. 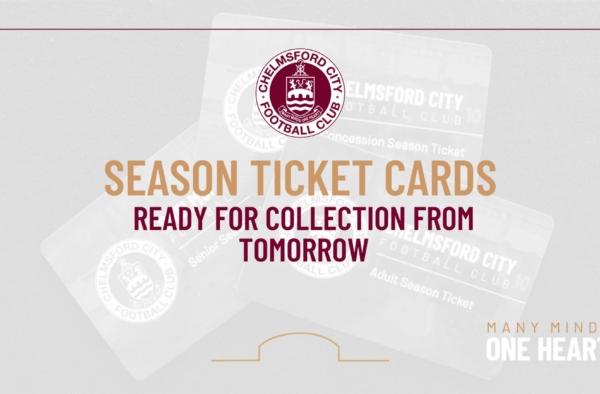 Supporters who purchased Season Tickets on or before Thursday, 28th July will be able to collect their Season Ticket… 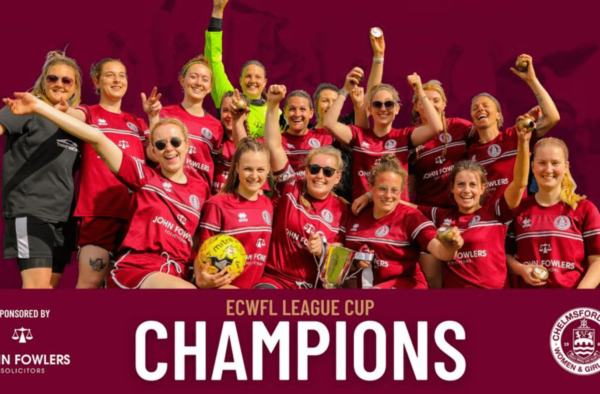