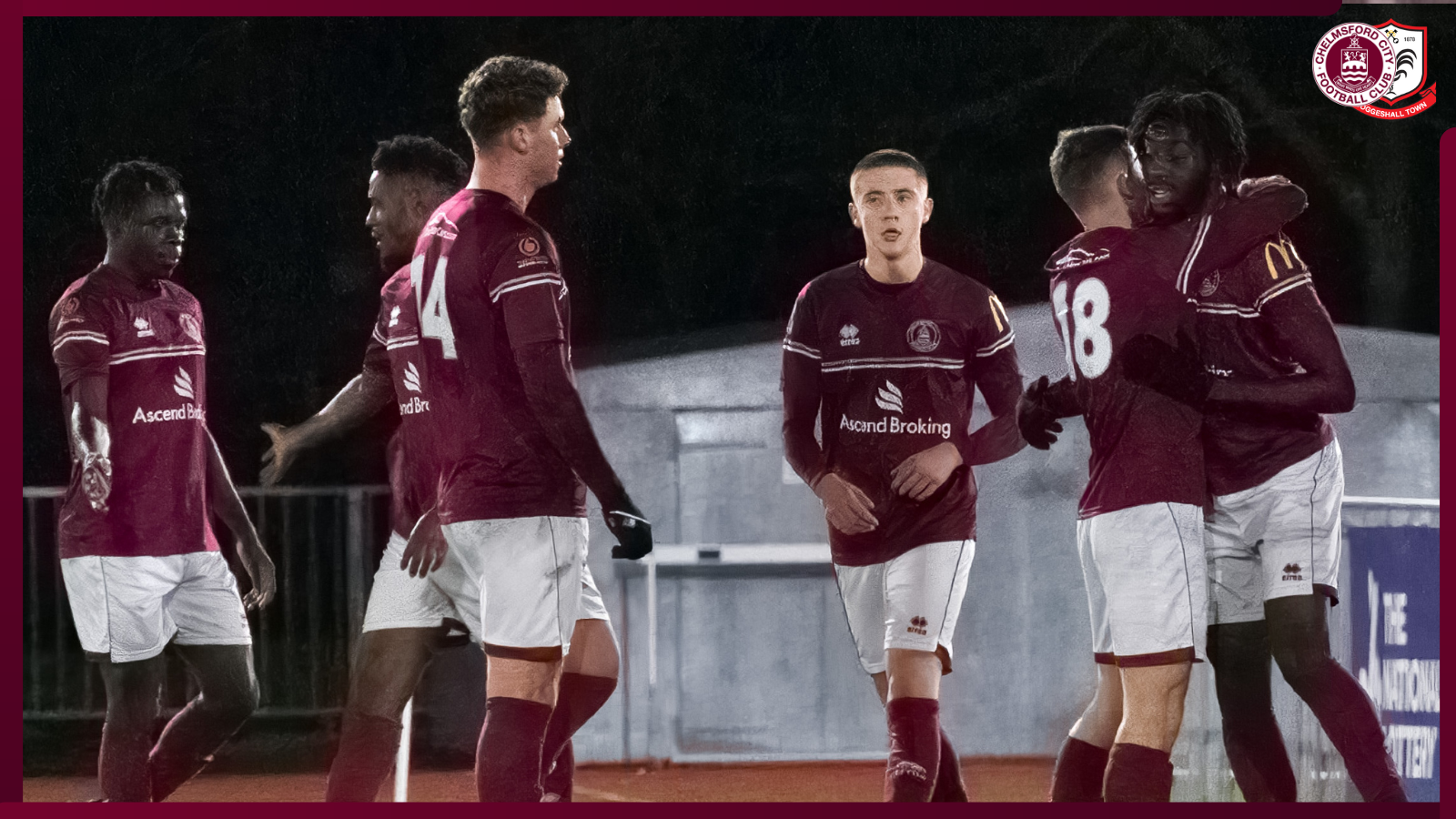 Robbie Simpson’s men looked to get back to winning ways in the Essex Senior Cup where the Clarets faced off against Coggeshall, a side with former Clarets managers Jason Maher and Mark Hawkes in charge. Rotation brings the threat of an upset, with Coggeshall looking to be a surprise package. Ultimately, it was a very professional and very well conducted performance by the Clarets who, deservedly booked themselves a place in the Essex Senior cup quarter-finals, waiting to see who they will face. Callum Jones was arguably the star of the showing, taking the match ball home after a superb display.

An XIs worth of changes came to the side with a mix of youngsters and experience taking the field. Jacob Marsden returned in goal, taking the armband. Youngsters Harry Davison, Finn Wilkes, Samba Badjana and Freddie Hockey all started. Jamie Yila made his first start since returning from suspension. Elsewhere, Khale Da Costa returned for the first time since injury with Cameron James back in the starting line-up. Guy Norton made his first appearance since his pre-season injury with Callum Jones once again starting. Finally, Arjanit Krasniqi made his first start for the Clarets at Melbourne Stadium. Manager Robbie Simpson was joined on the bench by Simeon Jackson, Henry Ochieng as well as Anisius Lewis and Reggie Gregory.

We got underway under the lights at Melbourne as a rotated, but strong, Chelmsford side looked to progress in the cup. Chelmsford looked to show their dominance early on as Callum Jones chased down defenders, supported by Freddie Hockey, both eager to win the ball back. It was Cameron James who had the first real chance for the Clarets as Khale Da Costa brilliantly whipped in a corner and the defender beat his man but could only header over the bar. City broke the deadlock just minutes later as it was that man again. Callum Jones drifted towards the back post from a corner and stayed unmarked, seeing him head rather easily past Tom Middlehurst and into the back of the net. The striker made it 2 goals in 2 starts, since his return, to the delight of the Clarets fans. Chelmsford continued to come forward with Jamie Yila finding joy on the left, beating his man and finding Arjanit Krasniqi just on the edge of the box. The Kosovan fired his shot towards goal but could only force Middlehurst into a good save. Yila was involved once again as he continued to strive forward on the left hand side, but was taken down by Jamie Bennett after he had knocked the ball past him.

Coggeshall did grow into the game and it was Josh Osude who drew their first chance, almost out of nothing. The winger, most notably having played for YouTube founded Hashtag United, used his electrifying to burst through the City defenders and get himself 1 on 1 with Jacob Marsden. The Clarets defenders watch as the ball trickled past Marsden and the post, as Osude seemingly wasted a good chance for the visitors. With half an hour on the clock, it was the Yila show once again. Jamie twisted and turned, beating numerous Coggeshall defenders, and eventually finding space. The tricky winger fired low and hard and, all be it with a minor deflection, put Chelmsford into a 2 goal advantage. On his first start for over a month, Jamie celebrated with fans and his teammates, all in delight of the 2-0 lead. Freddie Hockey was next to test the keeper. Khale Da Costa held the play up well and managed to picked out Hockey who did well, getting the chance to shoot, only to force a fairly easy save out of Middlehurst. Before the half could end, the visitors got another chance. Yet again, it was Josh Osude causing trouble as he twisted and turned and fired an effort towards goal, causing no trouble to Marsden’s goal. That was the final action of the half as Chelmsford took a 2-0 lead into the break.

The second half started slowly with no real opportunities arising for either side. Just before the hour mark, Freddie King got himself the ball in the Clarets box and managed to get a shot off, only for it to not be directed goal wards. A few minutes later, just after the hour mark, Callum Jones brought the ball down from a Freddie Hockey cross, muscled off his man, span and fired the ball into the bottom corner and scored his second goal of the night. The game was all but put to bed as Chelmsford continued their fine performance. Some good play from Jamie Yila was next upon the cards as he evaded his marker, only to be brought back down and fouled. The resulting free kick, about 30 yards, was fired over the bar by Cameron James, much to Liam Trotter’s disappointment, which he showed, shouting ‘that was rubbish Cam!’ from the stands. Robbie turned to his bench next as he gave Reggie Gregory some minutes, on his return from injury. Khale Da Costa made way, on his first start in a while. Less than 2 minutes after the change, and it was 4 for Chelmsford and 3 for Callum Jones who made himself a hattrick hero. Jones was played in perfectly, and put an inch perfect shot past Middlehurst and in off the post.

After the high of the goal, Cameron James nearly brought it crashing down as he attempted to turn but lost out to Freddie King who was sent in on goal. The Coggeshall man did not hit an effort towards goal as he attempted to round Marsden. Harry Davison got back in time and saved Cameron James, preventing the goal and keeping Chelmsford’s clean sheet intact. After this, the final changes for the home side came. The man of the moment, Callum Jones made way after a truly stunning performance and promising striker Anisius Lewis made his way on to the pitch. Elsewhere, Jamie Yila, scorer of the second goal, made way for Simeon Jackson, who got some more minutes in the tank. It did not take long for the substitutes to make an impact as a Krasniqi corner was turned in by Lewis, who scored his first ever goal for the Clarets. There was some debate to whether Simeon Jackson got the final touch, but the veteran Canadian was more than happy for the Youngster to be on the scoresheet. With the game coming to a close, Chelmsford seemed to lack a bit of concentration. Nathan Fuma, with some excellent skills managed to find space for Coggeshall and fire a shot at goal. The effort seemingly was too powerful for Jacob Marsden as the shot was nearly saved but just about crept under him and in. Coggeshall did not give up and gave everything to the final whistle, including hitting the post in added time. The referee brought the game to an end and the Clarets seal their place in the next round, after a dominating display. The 5-1 will give Chelmsford some good confidence which they will need to take in to their FA Trophy tie with York City, coming up this weekend. 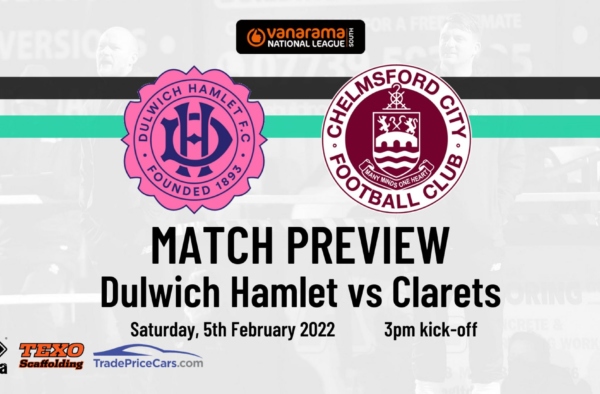 Champion Hill is this week’s destination as the Clarets travel to London to face Dulwich Hamlet away from home. 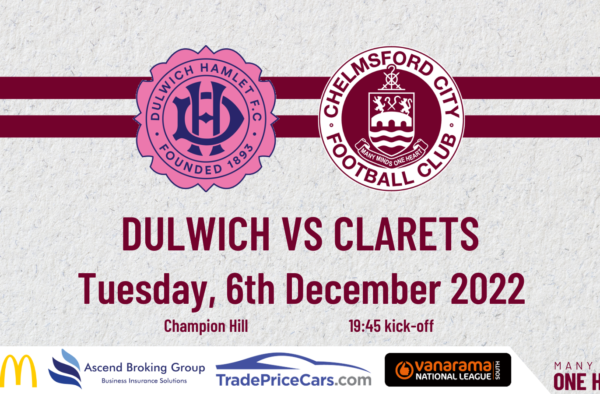 Ticket details for the visit to Dulwich Hamlet in the Vanarama National League South. Tickets are now available to…