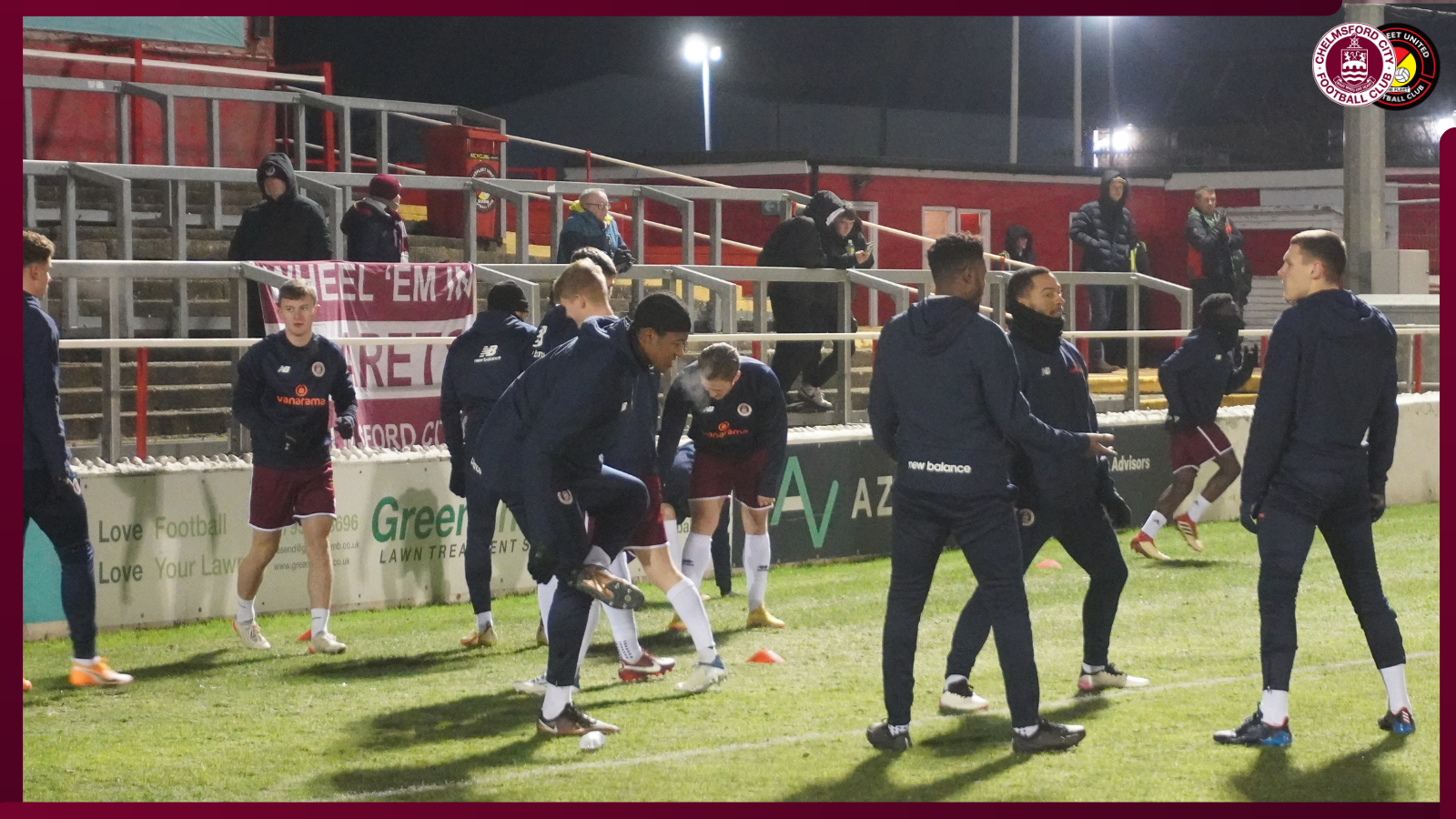 After disappointment last time out against York City, the Clarets looked to get back on track against a tough opponent, Ebbsfleet United. Dennis Kutrieb’s men were on a tricky run, winning against some lower league side, but losing out twice against Dartford over the festive period, with an aggregate score of 8-1. It was not to be for Chelmsford on the night, with Ebbsfleet’s clinical finishing what won them the game. A good performance from City was not rewarded.

Robbie Simpson took a changed eleven to Ebbsfleet with 4 changes being in place. Jazzi Barnum-Bobb came in to the starting eleven along with Kai Yearn, making his first start since rejoing on loan last week. Chelmsford would be without Liam Trotter who picked up an injury against York. According to Robbie Simpson, the midfielder will have to have a scan before seeing how long he will be out for. His replacement was Arjanit Krasniqi, who partnered Henry Ochieng in midfield. Another change for the Clarets was Jamie Yila coming in to the starting eleven. The 3 others who left the starting line-up was Eduino Vaz, Harry Lodovica and Callum Jones, all being on the bench.

On a cold Tuesday night in Northfleet, the game got underway. Within the early stages of the game Chelmsford got a good chance. Fleet keeper Mark Cousins looked to have to under control, but dropped the ball, with it ending at the feet of Jamie Yila. He managed to flick the ball round Cousins, but there was a man on the line there to clear. Early on, Chelmsford dominated possession and continued to look for a way through the Ebbsfleet back line. A good chance broke for the hosts as Ebbsfleet broke on the counter attack and Dominic Poleon being planned through on goal. The striker set himself well, but Eddie Beach got down well and saved with his feet. Just after the halfway mark in the first half, another great chance opened up for the Clarets. Henry Ochieng dispossessed the Fleet and found Arjanit Krasniqi. He picked out a ball to Kai Yearn who opened up the space, a had a good effort go just past the post.

Minutes later, the deadlock was broken. Some good team play from Ebbsfleet saw Josh Wright link up with Sterling-James who found Rakish Bingham. He took it on well and fired the ball past Eddie Beach, to give the hosts the league. The Clarets looked to hit back after as Jamie Yila broke away well on the left-hand side. Sterling-James tracked back well and managed to halt Yila’s progress, before managed to out muscle him and win the ball back. Ebbsfleet were on top with Josh Wright getting a shot on goal. The ball seemed to be going out of play but was kept in and another chance arose. The ball was played across, and Franklin Domi dragged his effort wide. Chelmsford broke a chance to score with a few minutes left in the half. Yearn had his initial effort blocked by Alex Finney, before he had another shot saved by Mark Cousins. 2 minutes were added on at the end of the half, were nothing amassed to any danger.

The half time break brought a change to the Clarets team, as Jamie Yila had picked up a first half injury so was replaced by Callum Jones. The first chance of the second half went the way of Ebbsfleet as Sterling-James outpaced his man and sent a low cross in towards Bingham. He completely fluffed his effort and missed the ball, allowing the Clarets to clear their lines. An attempted counterattack was stopped by Ebbsfleet’s captain Chris Solly as he brought Reece Grant down and gave the Clarets

a free kick. The free kick did not come to anything and Ebbsfleet regained possession. Another Ebbsfleet player made their way in to the book a few minutes later. Luke O’Neill fouled Blackwell and the referee booked the full back. Ebbsfleet came forward again as Domi picked out Poleon and he took a shot on, only to find the hands of Eddie Beach.

With 20 minutes left on the clock, Chelmsford continued to try get an equaliser. Arjanit Krasniqi picked out Kai Yearn in the box who controlled well and got a shot off a goal but Cousins was equal to the shot. Once again, Ebbsfleet came forward and O’Neill got another chance, being through on goal with only Eddie Beach to beat. He managed to steer himself around the keeper but hesitated to shoot, allowing Eddie Beach to recover and win the ball back. Beach was involved once again as the ball broke for Edser on the edge of the box. He managed to take a volley and send it towards goal, only for Beach to be on par with it, making the save. With just over 10 minutes left on the clock, Simpson turned to 2 final changes. Simeon Jackson and Khale Da Costa came on to the pitch with Tom Blackwell and Reece Grant leaving the field. The first play after the subs saw Frankie Terry booked. He brought his man down then accidentally kicked the ball at him, seeing the referee brandish the yellow card. Yellow cards were traded as Jack Paxman pulled Ochieng down as he tried to counter, and the referee rightly booked the Ebbsfleet man.

With few minutes to go, Poleon managed to dispossess Winfield and get a shot off, but not one which Eddie Beach was not up to the task of, as he made yet another good save. Henry Ochieng then got himself yellowed for a foul, seeing the free kick sent over but only go out for a corner. The resulting corner dropped at the feet of Luke O’Neill who span and fired his effort in to the back of the net, doubling the lead for Ebbsfleet with a mere seconds on the clock. 4 minutes were added on, and Cameron James saw himself booked, before the 4 minutes were up and the referee had blown the full-time whistle. An unlucky day for the Clarets who played relatively well but could not hit the back of the net. Chelmsford will look to regain some form against strugglers Weymouth, down in Dorset. 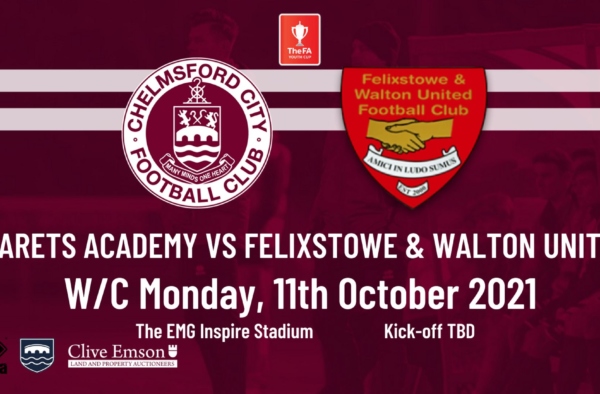 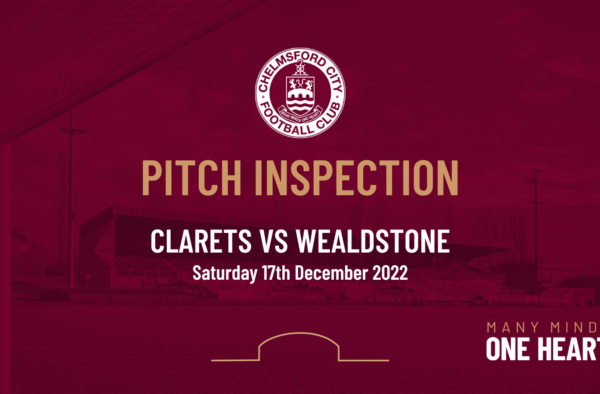 Ahead of Saturday's Isuzu FA Trophy fixture with Wealdstone, there will be a Pitch Inspection at 15:00 When the inspection…