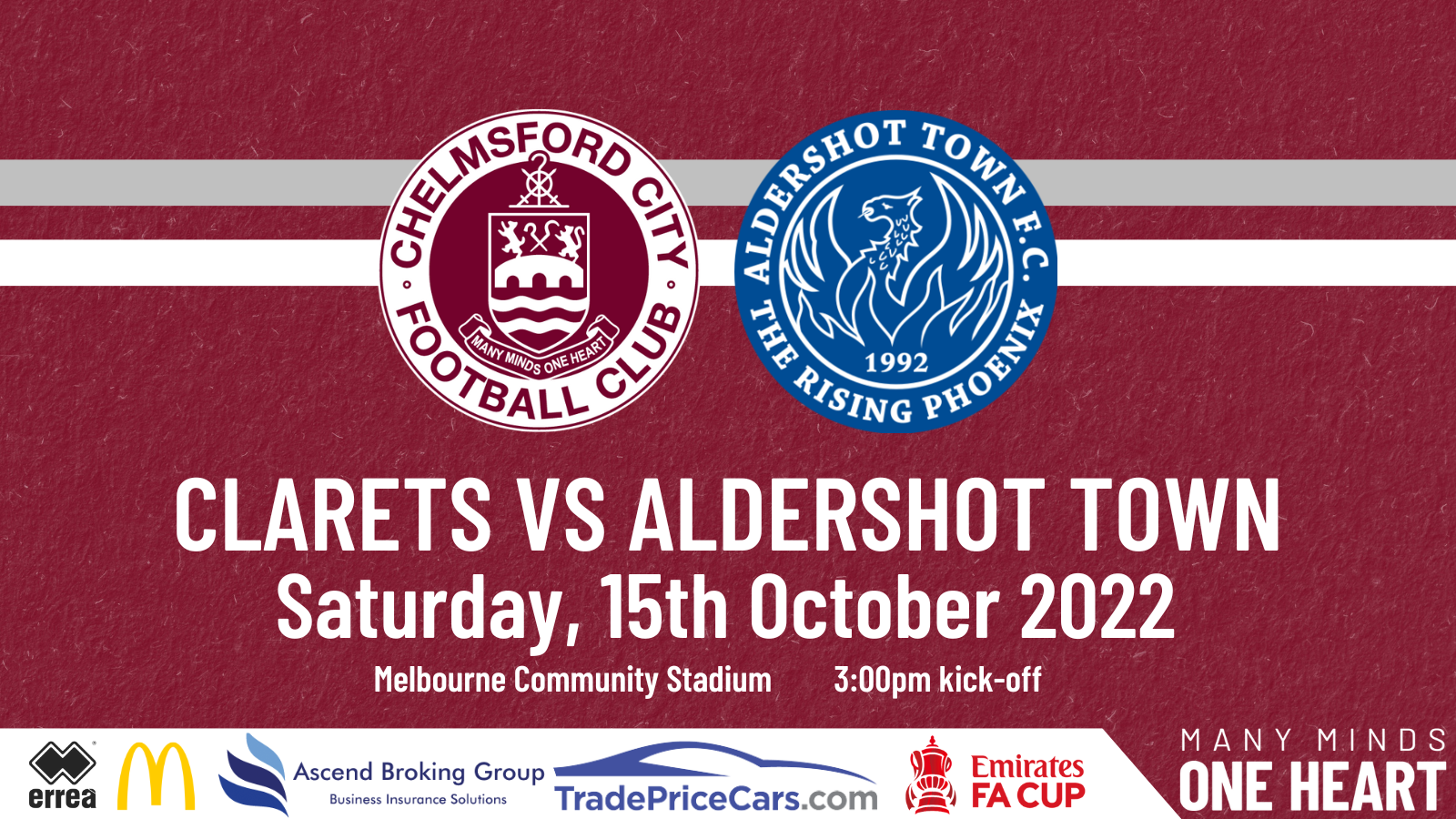 Chelmsford City turn their focus towards the Emirates FA Cup this Saturday, 15th October when they take on Vanarama National League outfit Aldershot Town FC in the 4th Qualifying Round, kickoff 3pm.

Chelmsford are unbeaten in their last 7 games, with only 2 goals conceded in those matches and have won 6 out of those 7 games. The Clarets have only played 2 games in the world’s oldest cup competition so far this season, scoring 11 goals and only conceding 1 but it will be a tougher test against Aldershot who play in the league above City.

Aldershot sit in 22nd place in the Vanarama National League. The Shots have played 13 league games this season, winning 3, drawing 2 and losing the other 8, scoring 17 goals in the process and conceding 22. This is their first game in this season’s FA Cup, but they have lost at the 4th Qualifying Round stage in the last 3 seasons, including a 2-1 away defeat in Essex at the hands of Isthmian Premier side Bowers & Pitsea. As Aldershot Town their best run in the FA Cup was back in 2012-13 when they reached the 4th round, before losing to Middlesbrough at the Riverside Stadium 2-1 where a late Lukas Jutkiewicz goal knocked them out.

In terms of players, Aldershot have Fulham loanee Luca Ashby-Hammond in goal who has played every minute of the league campaign so far this season. His older brother Taye is also at Fulham and is out on loan at League Two high flyers Stevenage. Aldershot’s team is made up of a lot of former Bournemouth academy players, well known to manager Mark Molesley as he played for the Cherries and spent a few seasons there working as a coach in the youth set-up down in Dorset. Defenders Oliver Harfield, Tyler Cordner and Corey Jordan have all come through that route to Aldershot. They also have right-back Archie Davies who spent the last two seasons playing League Two football with Crawley. On the bench last time out as well was Chicago born defender Giles Phillips. In midfield they have Chesterfield loanee Tom Whelan who also played under Molesley at Weymouth. They also have two more former Bournemouth academy players in Frank Vincent, on loan from Notts County and also Ryan Glover. In wide areas they have two QPR loanees in Ody Alfa and Faysal Bettache, both of whom spent previous loan spells at Billericay Town. They have loaned out winger Francis Amartey to Farnborough whereas experienced former Braintree midfielder Kenny Davis has come in the other way on a month’s loan. Up front they have former Braintree and Maidstone attacker Justin Amaluzor as well as 6’4″ target-man Inih Effiong who has scored plenty of goals at National League level with Woking and Dover amongst his former clubs. They also have Saint Kitts and Nevis international Harry Panayiotou who was playing last season at Motherwell in the Scottish Premiership.

Aldershot’s boss is their former player Mark Molesley. Molesley had two spells at the Shots, including playing against Chelmsford the last time the two sides met in a competitive match, the 1st round of the FA Cup back in 2006. Molesley was a midfielder in his playing days and also appeared for Bournemouth, Plymouth and Exeter amongst others. In management he worked in the academy at Bournemouth before taking the reins of Weymouth and leading them up from the Southern League to the National League. He then had a difficult spell at Southend in the 2020-21 season before taking the reins in Hampshire in September last year. Molesley and Chelmsford manager Robbie Simpson were also teammates when they both played for Cambridge City in the 2005-06 season in the Conference South.

As mentioned before, the last time the sides met competitively was in the FA Cup 1st round in the 2006-07 season. Chelmsford were in the Isthmian Premier at the time and Aldershot were in the Conference, although they were just 1 season off promotion the Football league. City took the lead in the first game through a Jeff Minton penalty but a Ben Chenery own goal took the tie to a replay. The second game was won by Aldershot 2-0 thanks to a Darren Barnard penalty and a late goal by John Grant. The Shots progressed to the 3rd round that year until they were beaten 4-2 at then League One side Blackpool. Then Aldershot boss Terry Brown is back at the club as Head of Football Operations.

The two clubs did play each other in a friendly before the 2019-20 season which City won 1-0 at Stanway Rovers’ stadium The Hawthorns thanks to a Chris Whelpdale goal.

Former Aldershot player Dave Winfield returned from injury last Saturday against Cheshunt so should be fit to face his former club. Cameron James was suspended and injured last week but could return to the squad if he came through training successfully this week. Last round’s hat-trick scorer Khale Da Costa injured his ankle in the warm-up last weekend but it is hoped that he will be weeks out rather than months. Young striker Callum Jones is still out long-term with his ankle injury.

If Simeon Jackson appears tomorrow it will be his 50th appearance for the Clarets, having netted 22 goals for the club. Jackson scored 2 goals against the Shots in May 2021 whilst playing for Kings Lynn and also netted against them back in 2008 while with Gillingham.

Based on further communications this week the club has regrettably taken the decision to segregate the game tomorrow.

There will be away supporters’ turnstiles, refreshments and toilets on the day.

Apologies for any inconvenience caused, we look forward to welcoming everyone to the Melbourne Community Stadium tomorrow afternoon.

You can purchase tickets at the turnstiles via cash or card, which will be open from 1pm, or tickets can be purchased in advance of the game by using this link.

If the game is a draw after 90 minutes, there will be a replay on Tuesday 18th October at Aldershot’s Recreation Ground, with a 7.45pm kickoff.

It is set to be a mild day with 17 degrees expected at kickoff with no rain forecast! 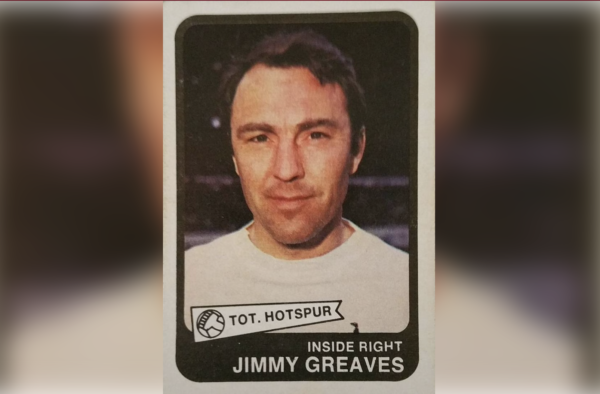 In the first of our 'Throwback Thursday' series we feature legendary England and one-time Chelmsford City striker, Jimmy Greaves.…