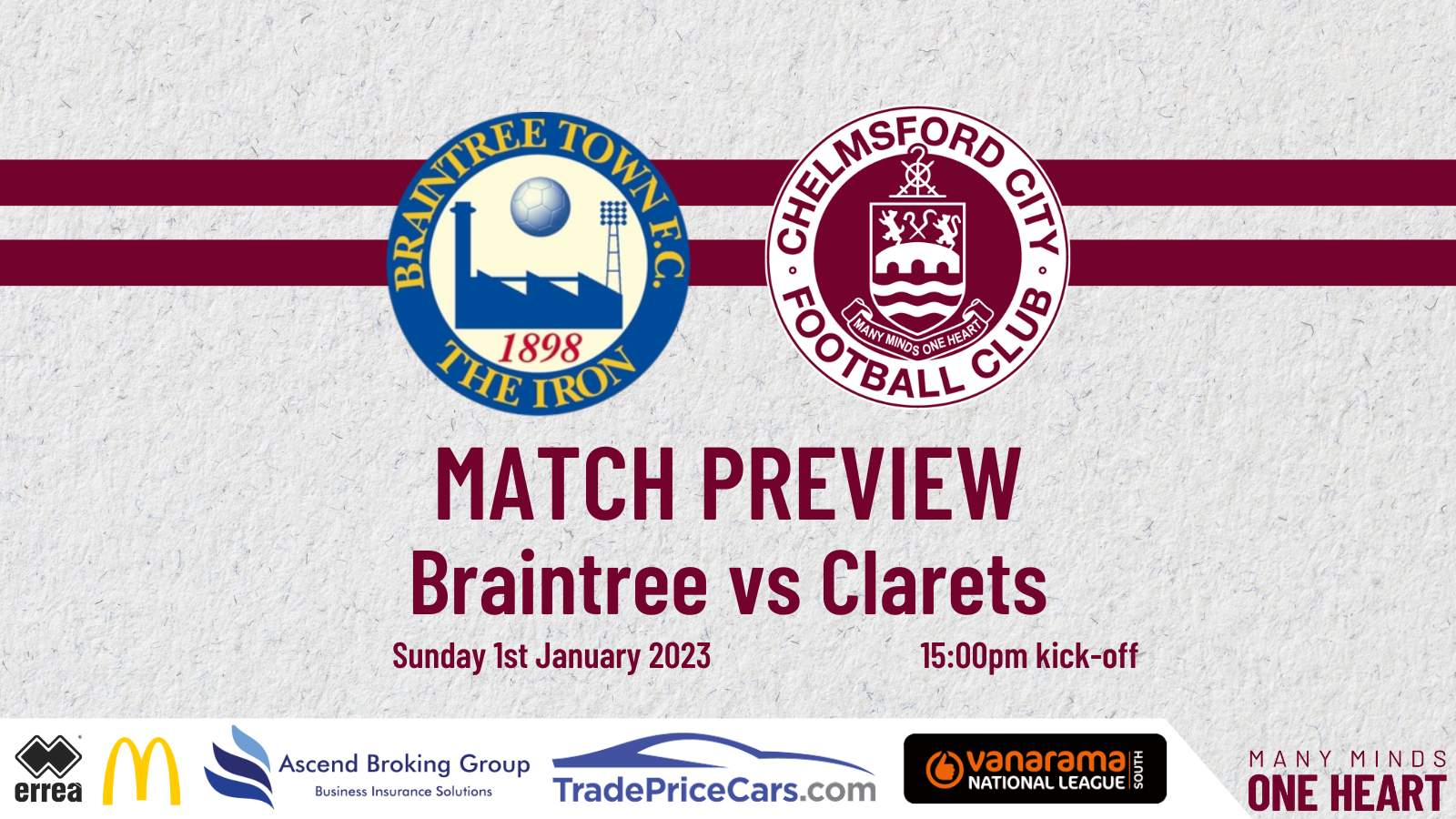 Chelmsford City start 2023 with another Essex derby against Braintree Town this time at Cressing Road on Sunday 1st January. (KO 3pm) This also starts a busy period for City with 4 games in 9 days and also an unbelievable 10 games scheduled for the month of January!

Braintree sit in 9th place having played 23 games in the Vanarama National League this season. They have won 10, drawn 6 and lost 7, scoring 35 goals and conceding 29 in the league campaign so far which all adds up to 35 league points.  After Chelmsford ended a 6 game unbeaten run for the Iron, Braintree have played a game in the interim, coming from behind to draw against Chippenham with Kyran Clements scoring but Jack Cawley was sent off. This kept up Braintree’s unbeaten home record with 6 wins and 5 draws in 11 league games. Chelmsford though will be looking to get back to winning ways after back to back road losses.

In terms of players, Braintree have former Welling and Blackpool keeper Jack Sims. In defence they signed in the summer former Colchester and Southend defender John White, now 36 years old. They also have former Cambridge United defender Leon Davies, as well as former Wealdstone and Bromley centre-back Jack Cawley who is on loan from Maidstone. In midfield they have Bermuda international Willie Clemons, as well as former Hampton & Concord man Kyran Farrell. They also have Chris Regis, who has played for clubs all around the country, from Port Vale to Truro! Up front Braintree have some talented individuals, including two former Clarets in Lamar Reynolds, who switched from Concord in August and Matt Rush, who spent time last season on loan at City from Southend United. They also have former Norwich youngster Alfie Payne and Aaron Blair who has scored 5 in 12 league games on loan from Dagenham & Redbridge. Another player to watch out for is talented former Arsenal and Crystal Palace youngster Alfie Matthews who had a spell at Welling last season.

Braintree’s boss is 34 year old Angelo Harrop. Harrop was appointed in the summer after a successful spell as joint-manager of AFC Sudbury, he previously managed Stanway Rovers. Braintree also have in their management team former Claret Head of Football Operations Steve Pitt.

Chelmsford are undefeated since 2010 against Braintree, when Sean Marks scored twice in a 3-0 victory. Last season at Braintree, Chelmsford drew 2-2 after being 2-0 up with Luke Holness and Stefan Ilic scoring for the Iron. Tom Blackwell has scored in all 3 of his Chelmsford appearances against Braintree. The teams have only played each other 3 times competitively at Cressing Road since 2010 with the scoreline twice being 2-2 and the other match was a 2-1 victory for the Clarets with Tom Knowles and Shaun Jeffers scoring for City.

Chelmsford City have a few injuries and suspensions to deal with ahead of the New Year fixture. Goalkeeper Ovie Ejeheri returned from injury and is available until January 9th on loan. Jacob Marsden is absent due to illness. Eduino Vaz is available from suspension but Jamie Yila still has two games of his to serve. Callum Jones returned to the pitch after being out since August on Boxing Day and Khale Da Costa returned to the bench although Clarets manager Robbie Simpson said he was not quite ready for action. Louis Dunne and Ade Oluwo remain out with their long-term injuries. Former Braintree striker Reece Grant entered on Boxing Day for his Chelmsford City debut and scored a penalty which he won himself.

Tickets are only available to be purchased at the turnstiles at the Dunmow Group Stadium on New Years Day.

Braintree Town accept both cash & card at the turnstiles.

Supporters coach details are below: 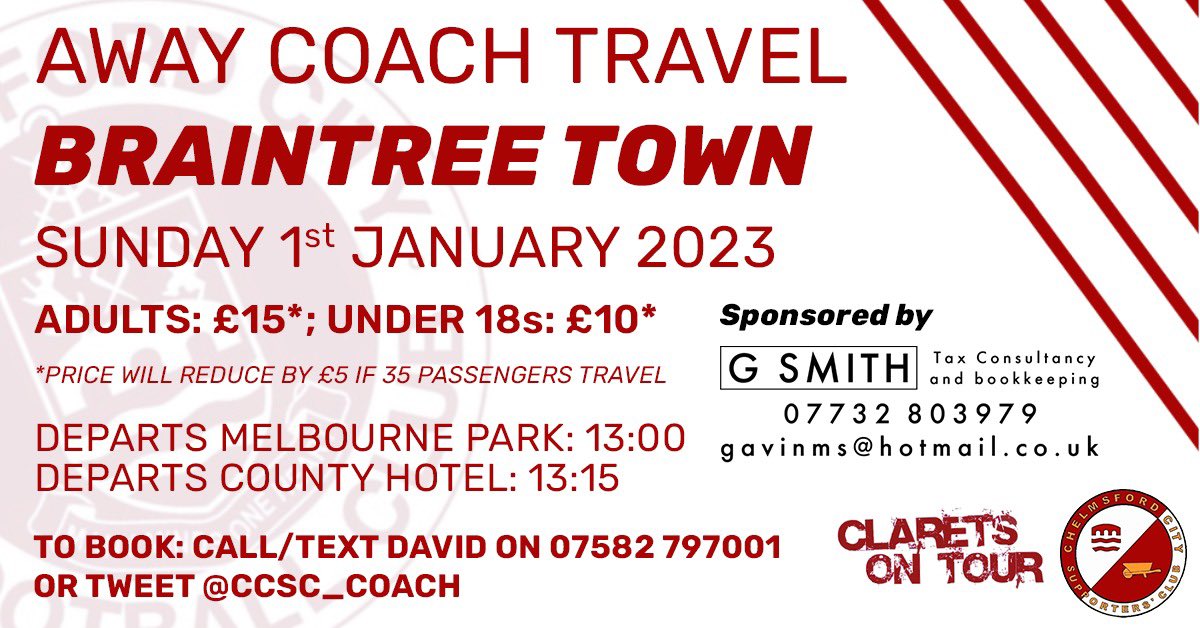 By car take the A120 to the Galley’s Corner roundabout, then take the exit down Cressing Road. After 3 quarters of a mile, take Clockhouse Road on the left and follow the road around to the stadium. There is a parking charge levied to park your car.

There is heavy rain forecast for New Year’s Eve but hopefully by New Year’s Day the weather will be clear with a mild temperature of 10 degrees. 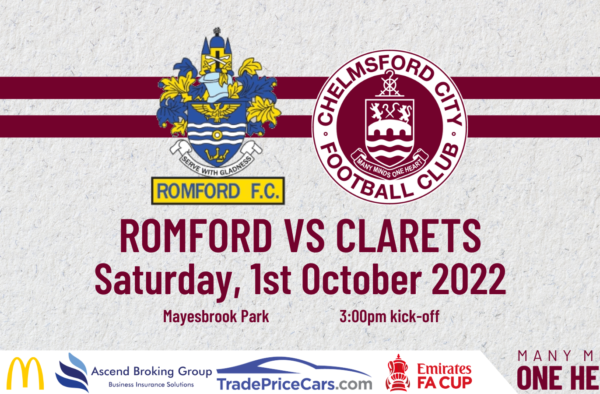 Chelmsford City turn their focus towards the Emirates FA Cup this Saturday, 1st October when they take on Essex… 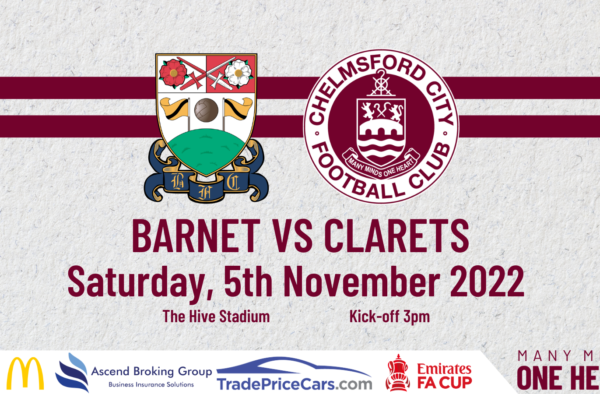