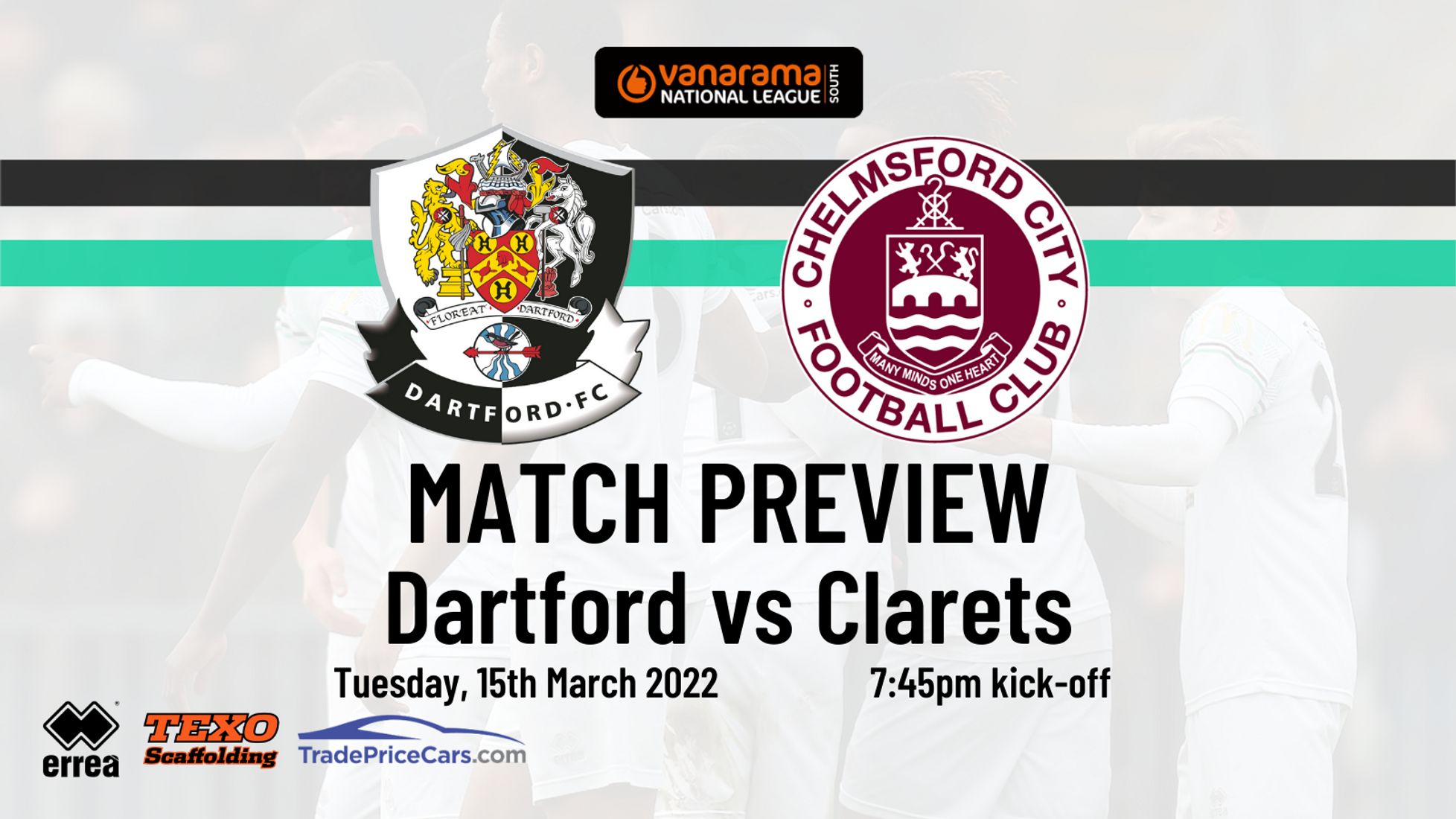 The Bericote Powerhouse Princes Park Stadium is Tuesday’s destination as the Clarets face Dartford in the Vanarama National League South.

City go into tonight’s fixture looking to bounce back after the 1-0 defeat at home to Eastbourne Borough at the weekend.

An unfortunate own goal from Jacob Marsden with 10 minutes to go was enough for the Sports to claim all three points at the EMG Inspire Stadium, with the Clarets suffering a fourth defeat in as many games.

Should results go our way, a win for Robbie Simpson’s side could see City rise up the table to 14th.

Meanwhile, despite defeat for themselves at Chippenham Town on Saturday, Steve King’s Dartford sit comfortably in the play-off positions in 5th.

With three wins and two losses in their last five games, a win for the Darts could see them leapfrog Ebbsfleet United and Oxford City into 3rd.

Those attending are able to both purchase tickets in advance and at the turnstiles on the day of the game, with the prices remaining the same.

The Darts take cash and card payments at Princes Park or to get yours in advance, follow this link.

As mentioned above, the Clarets suffered defeat in our previous outing, losing 1-0 at home to Eastbourne Borough.

Last weekend’s game was an opportunity to get back to winning ways at home after losses against the league’s title challengers Dorking Wanderers, play-off hopefuls Oxford City and Havant & Waterlooville.

City held the bulk of possession in the opening minutes, and a chance arose when Luke Deslandes found Tom Blackwell on the edge of the box and his shot narrowly missed the target.

The Clarets continued to build pressure through the early stages, as Charlie Sheringham managed to nod a Chez Isaac free-kick towards goal, however, this was cleared well by Boro.

The visitors got their first sight of goal in the 15th minute when a driven shot by Dominic Hutchinson forced Jacob Marsden into a strong save to his right.

A few minutes later, the Sports earned a free-kick where James Hammond decided to try his luck from the halfway line, which narrowly missed the top right corner.

The tempo dropped shortly afterwards, however, City managed to forge some good chances with Eduino Vaz and Sheringham both challenging Lee Worgan’s abilities.

City continued to show attacking intent as the half progressed, with Deslandes again finding one of the two strikers, this time Sheringham, who took a little too long with his shot and it was unfortunately blocked.

The first action of the second half fell to the Clarets, as Louis Dunne got onto the end of a clearance from Worgan, his strike from 20 yards forced the ‘keeper into a good save.

Despite the threat of Eastbourne counterattacks, City combined well through Vaz and Blackwell, with a cross from the left wing screaming to be poked home, however, Jack Currie somehow got back just in time to clear for a corner.

After a continuation of Clarets pressure, Boro earned a free-kick through Kendall. Chris Whelpdale managed to get on the end of a ball to the six-yard area, however, his shot failed to test Marsden.

The Sports then managed to take the lead following a throw-in, Charley Kendall caused confusion in the box as he challenged for the ball and Marsden, unfortunately, put the cross in his own net as a result.

Late attempts from City did not force a change in the score, as the Sports held on to claim the three points.

Despite defeat to Chippenham at the weekend, tonight’s opponents have found themselves in and around the play-off positions for the vast majority of the campaign, initially topping the table after going unbeaten in their first nine National League South games.

Over their 29 outings this season, the Darts have claimed 15 victories and eight draws, losing the other six fixtures.

Strong form in the league, however, may have come at a price with surprise defeats to lower-league opposition in the Emirates FA Cup and Buildbase FA Trophy.

The first coming against Pitching In Isthmian League North side AFC Sudbury in the FA Cup, before losing out to Southern League Premier Division Central side Needham Market in the FA Trophy.

Earlier this month, the Darts’ were also narrowly knocked out of the London Senior Cup to Brentford B, though they still have a Kent Senior Cup Quarter-Final tie to look forward to away to Margate on Tuesday 5th April.

With 10 goals in 16 appearances this season, striker Jake Robinson could be the dangerman for Dartford this evening.

The former Billericay talisman has had his injury struggles this season, however, the attacker has continued to show his class and keen eye for scoring goals in the games that he has featured in.

The 35-year-old started his career with Brighton & Hove Albion, making 148 appearances and scoring 22 goals in all competitions for the Seagulls.

Robinson would also go onto feature for Torquay United on loan from Shrewsbury, and Luton Town on loan from Northampton.

He’s missed the Darts’ last two National League South ties against Dorking Wanders and Chippenham, so Steve King will be hoping the forward is available for selection.

An excellent defensive display from the Clarets sealed a point at the EMG Inspire Stadium in a 0-0 draw against Dartford after a first-half red card in October 2021.

In a first half of key decisions from referee Jack Packman, City saw two penalty calls waved away by the man in the middle.

The first saw Tom Wraight brought down by Darts goalkeeper Dan Wilks as he collected a through ball and the second, Dara Dada appeared to be fouled just inside the box but again nothing was given.

Dada was later presented with a huge chance to open the scoring as he was found with a throw-in but Wilks was on hand to produce a point-blank save around six yards out.

Following the smart stop, the visitors raced up the other end of the field and Tom Dickens came together with a Darts attacker and Packman adjudged the youngster to have been the last man back before brandishing a straight red card.

The red card put the Clarets firmly on the back foot and the remainder of the first half was spent with backs against the wall.

Following the half-time break, the second half began as the first had ended, with Robbie Simpson’s side sitting deep and soaking up pressure.

With seven minutes of the second period played, a Dartford free-kick looked destined for the top corner but Jacob Marsden produced a superb, stretching save to tip the shot onto the crossbar.

Over the following 20 minutes, blocks, clearances, deflections and saves would fly in as the ten men defended valiantly against wave after wave of Dartford attacks.

Fifteen minutes from time and the Darts did have the ball in the back of the net from Adebayo Azeez but the linesman’s flag kept the scores level.

The remainder of the game followed the same pattern as the rest, with a nail-biting end to the match but it ended in a hard-earned stalemate to share the points.

Getting to the ground…

Dartford have provided directions on getting to Princes Park via this link. They have also provided disabled supporter information on their website here. 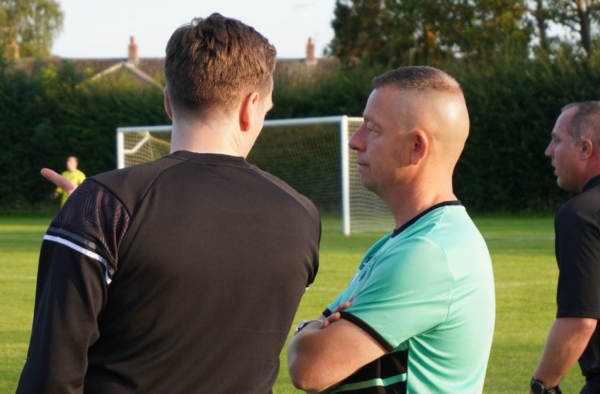 Elliot Thompson: “It’s a learning curve for the boys”

Reserves Coach Elliot Thompson has labelled the 3-1 victory against Earls Colne a “learning curve” for his players. 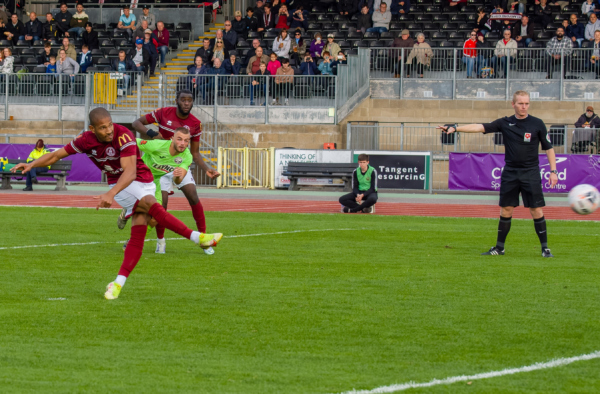 Words by Josh Lowe: Robbie Simpson’s men came off the high of an FA Cup victory against higher tier opposition…