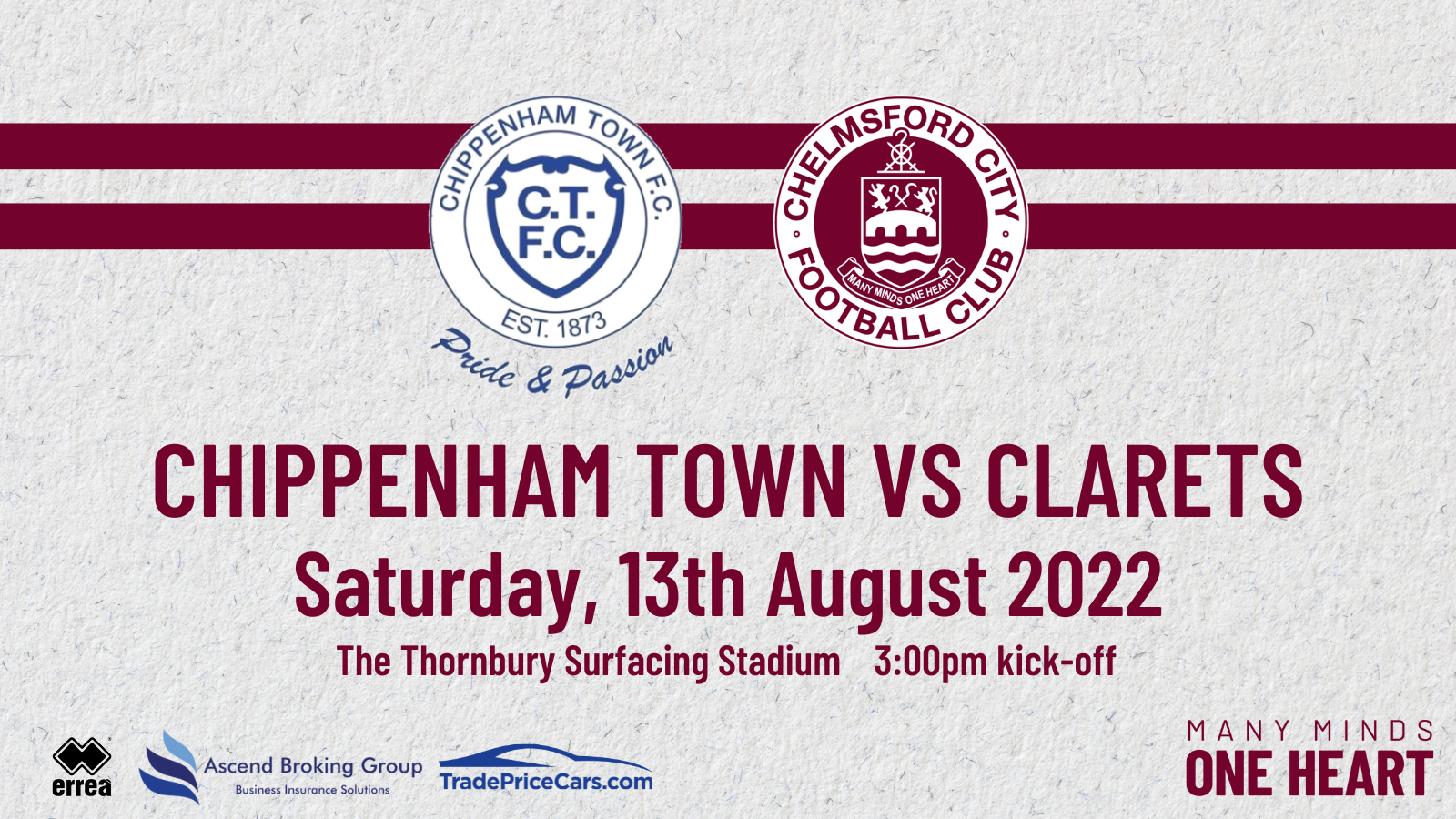 Chelmsford City will start their Vanarama National League South away programme with one of their longest journeys of the campaign, an almost 300 mile round trip to Chippenham Town.

The Clarets made an encouraging start with a hard-fought draw against St Albans in which they came from behind so will be looking to pick up their first win of the season at a ground they won at last campaign.

Chippenham Town had their highest ever finish in their history last season, as they ended the season in 7th in the Vanarama National League South. This was brought about after a run in their last 5 league games where they picked up 13 points, including winning at Havant & Waterlooville to nab the final playoff place from their hosts. In the playoffs, they knocked out Dartford away from home on penalties after a 0-0 draw and then took Ebbsfleet to extra-time but they eventually lost 1-0. Chippenham surprisingly replaced manager Mike Cook with former player Gary Horgan in April last year but the change almost paid dividends for the Bluebirds. Horgan remains at the club going into the new campaign. On the opening day of this season though they were comfortably beaten away at Ebbsfleet United 3-0 with goals for the Fleet from Greg Cundle, Toby Edser and Darren McQueen. A foul on impressive winger Omari Sterling-James also led to Chippenham being reduced to 10 men in the first half, Matt Jones the man who had to take an early bath.

In terms of players for the Bluebirds, defenders Danny Greenslade and Kieran Parselle now exit the M4 at a different junction as they have both moved to Bath. They have retained experienced campaigners such as defender Will Richards and midfielder Joe Hanks, who has scored against the Clarets for both Chippenham and Gloucester, which he did so in the FA Trophy back in 2015. Chippenham will look to their younger players this season with academy striker Noah Coppin starting that defeat at Ebbsfleet last week which was his first league start for the club. They have also kept mercurial Brazilian winger Alefe ‘Alfie’ Santos. The Sao Paulo born player is a fans favourite. In terms of new additions they have brought in Welsh youth international centre-back Pablo Martinez from Bristol Rovers, and also striker Joe Parker who has mainly plied his trade in the National League North, appearing for Gloucester and most recently, Leamington. They also signed 18 year old striker Seb Palmer-Houlden on loan from EFL Championship side Bristol City. Winger Aaron Simpson also made his debut off the bench as well, who counts Wolves, Dover and Sutton as former clubs.

Manager Gary Horgan after the game against Ebbsfleet said that there were plenty of positives to take from the game and claimed that the result could have been a different story if they had taken some of their early chances but that it was difficult after their sending off. He said that they were trying to be positive with 2 up front despite the 10 men and Palmer-Houlden could have scored a couple of goals as a substitute. He wasn’t sure tactically how they would line up against Chelmsford but he would have a look at them and prepare his team to win their first home game of the season.

Robbie Simpson did not lose against the playoff semi-finalists last season. The away game City won 3-2 in September with Charlie Sheringham scoring 2 and Simeon Jackson 1. City got into a 2 goal lead before 20 minutes and only made the game a nervy finish by conceding to Harry Warwick in the 91st minute after he tapped home after Jacob Marsden had saved a penalty. The home fixture last season ended 0-0 after Sheringham was controversially denied a goal after the celebrations when the assistant referee chalked it off for an alleged handball when it looked like the striker had chested it down. Chelmsford gaffer Robbie Simpson scored at Hardenhuish Park for the Clarets in December 2019 but the game finished in a 2-1 win for the home side.

Chelmsford City will definitely be without new signing Jamie Yila who is on the road to recovery having missed all pre-season. Dave Winfield took part in the warm-up last game so could play a part. Robbie Simpson must decide whether to stick with the same starting XI that started the last two games.

For Chippenham, their club website says that attacking midfielder Jordan Young is looking to play following training midweek after missing the first game via injury. Eddie Jones missed the opener via illness and winger Alex Bray will be out after picking up an injury in pre-season. Defender Matt Jones will be suspended after his opening day red card against Ebbsfleet.

Live match commentary will start from 2.55 pm on www.mixlr.com/radioclarets

Chippenham play at The Thornbury Surfacing Stadium, Hardenhuish Park. To get there take the M4 to junction 17 then take the A350 until the A420 and the car park is on this road on the left hand side. The car park is quite small so please park considerately elsewhere if it is full.

You can still book a ticket for the Supporters Coach run by Dave Cresswell from Chelmsford City Supporters Club. To book phone 07582797001. It leaves the Melbourne Stadium at 9.45am and the County Hotel on Duke Street in Chelmsford at 10am. The costs are £35 for adults, £25 for Under 18s and £10 for Under 12s. The costs for U18s and adults will be reduced by £5 if at least 30 passengers travel.

Chippenham is set to be 34 degrees Celsius during the game so please take precautions in the heat such as wearing suncream, drinking water and wearing your Chelmsford City FC hat.

Online tickets are available to purchase until 11am on Saturday, proof of purchase must be shown on the gate!

Children under 16 are free if accompanied by a fee-paying adult, with a max of one per adult. 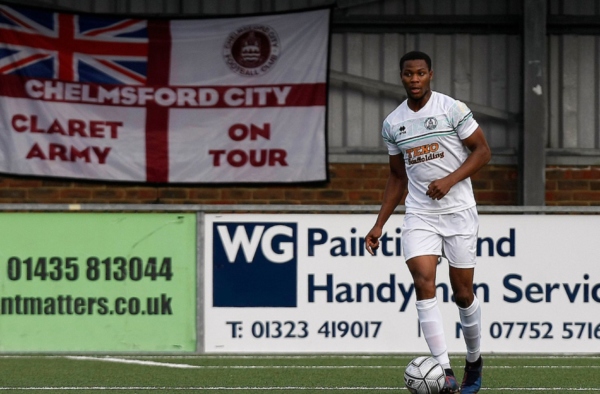 Chelmsford City is delighted to announce that Adebola Oluwo has signed a contract extension with the Club. 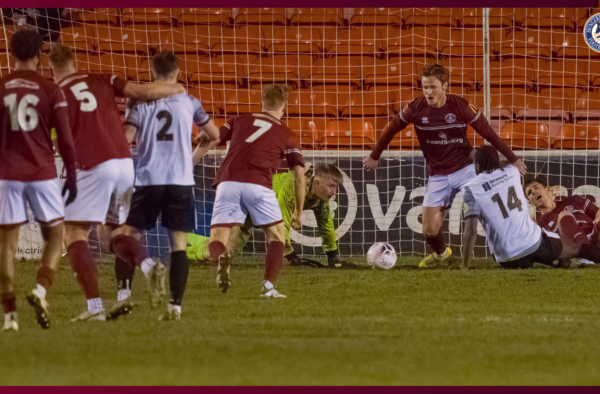 With disappointment on Saturday against Welling, Robbie Simpson’s men travelled down to Berkshire to face strugglers Hungerford Town. A…