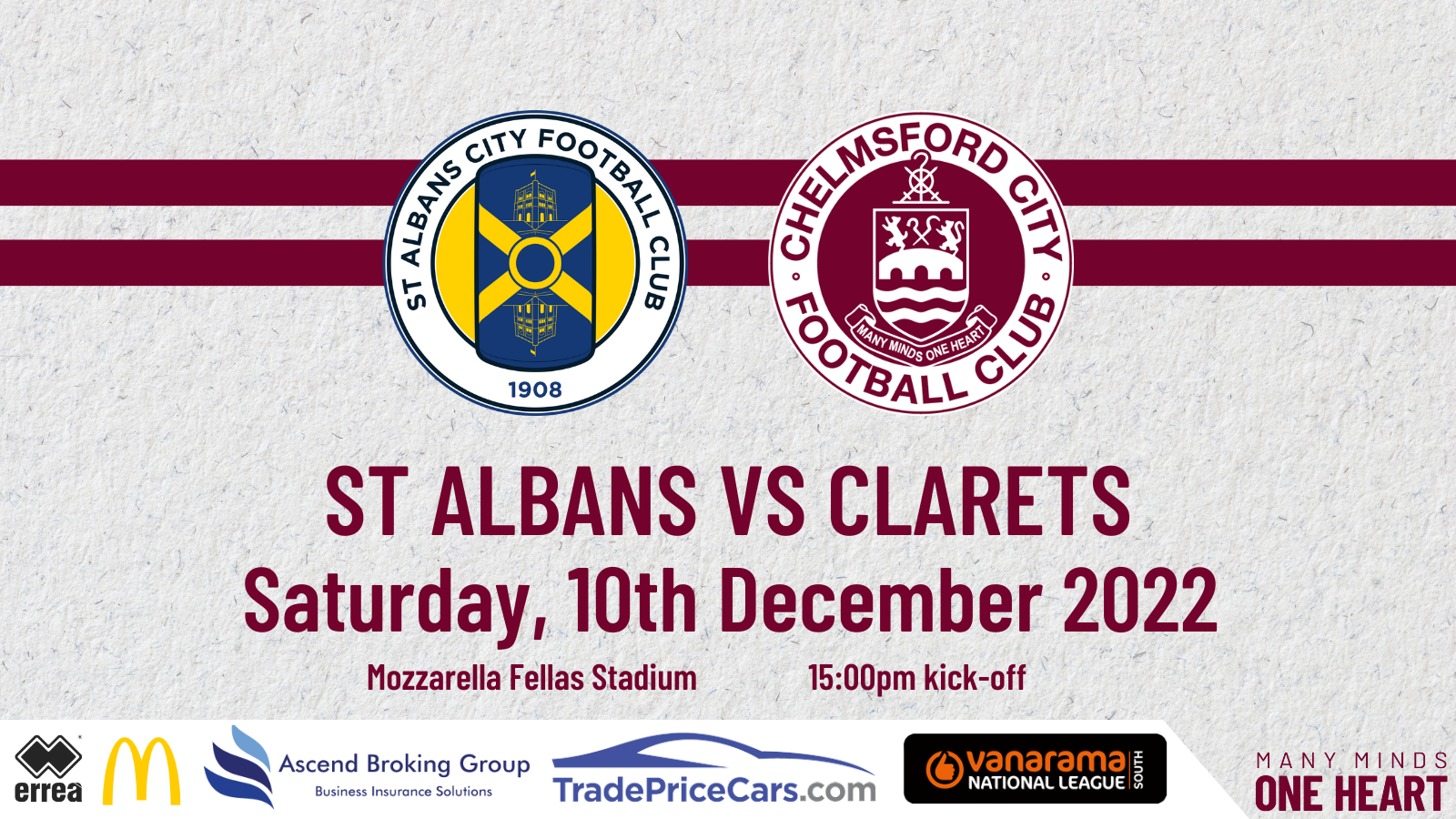 A Shaun Jeffers hattrick at the Mozzarella Fellas stadium sunk the Clarets to back-to-back defeats on the road. A penalty 4 minutes from half-time followed by a second half brace was enough to beat the Clarets on the day. Simpson made some changes to the team that faced Dulwich; Lodovica, Jackson and Esan dropped to the bench and in came Yila, Blackwell and Ochieng. The pitch had made it through the freeze and was deemed playable, in a bitterly cold Hertfordshire, unlike many other games up and down the country.

The hosts started out the brighter and looked to create an opportunity within the first five minutes. The Saints played a short corner, which saw Weiss pick out Jeffers in the Clarets box, but he fired over the bar, a warning sign for the Clarets.

The Clarets responded with some early chances of their own. Blackwell, who was leading the line, wriggled his way into the Saints penalty area but his effort was deflected at goal, and saved by Berry. The Clarets number 11 would be involved again shortly after as he was played in behind the St Albans defence but could only find the side netting. The next Claret chance would fall by way of a bouncing ball to Trotter who volleyed toward goal. Again, the Saints defence were able to get in the way of the strike and Trotter saw his effort deflected behind for a corner, which came to nothing.

Just after the quarter of an hour mark, the hosts combination of Weiss and Jeffers again looked to ask questions of the Clarets defence. Weiss picked the ball up in midfield and slipped the ball into Jeffers. The Saints skipper collected turned and looked to beat Ejeheri, but he didn’t connect well with his effort and the Clarets’ keeper was able to get down and collect.

A period of no-real talking points would emerge in the middle of the first period as both teams failed to create anything and each side were looking to slip the game into their stride. The hosts came out of this the better as they started to pressure the Clarets defence before ultimately breaking the deadlock.

Another short corner from the hosts looked to ask questions of the Claret backline. Stanley picked up the ball from the set piece and from deep swung a ball into the box where a crowd of yellow shirts awaited, his delivery was just too high for a Saints head, and it would eventually go out for a goal kick. The Saints would come again minutes later with Weiss who made his way in behind the Clarets defence. He wound up an effort but didn’t get as much behind it as he might’ve liked, with Ejeheri getting down low to save comfortably.

The Clarets last real opportunity to notch ahead before the break came from a Dunne freekick from deep. The ball was swung high into the box, Yila rose highest beating Saints keeper Berry to the ball, but he couldn’t get his header down and nodded his effort over the bar.

Just 5 minutes from the interval, the referee awarded St Albans a penalty with Vaz allegedly fouling Jeffers. The Saints man was in behind the defence and running towards the by-line but went down and was awarded the spot kick. The Saints skipper stepped up to take the penalty himself, with the penalty area cleared, Jeffers slotted home the penalty to give the hosts the advantage into the break.

The penalty was the last chance of the half for either side and despite each team creating some chances it was the first clear cut opportunity of the tie. The Clarets faced an uphill battle to get back into the game as the hosts would no doubt look to continue to build on their lead.

Just three minutes into the second half, Clarets midfielder Dunne went down off the ball and required some medical treatment. He was eventually stretchered off with an unfortunate injury with what appeared to be Dunne turning his ankle and knee as he slipped trying to recover possession. He was in clear discomfort from the minute he went over and likewise when being taken off, we hope the injury isn’t as serious as it seems and are all behind Louis Dunne in his recovery.

Following the lengthy delay in the treatment of Dunne, the Saints restarted the game looking the better side. The hosts broke away down the left before a ball was played across goal to Jeffers, Ejeheri made himself big and denied the striker his second of the day. St Albans would come again in a 3v1 counterattack.  Sundire and Moore attacked down the Saints left as they looked to punish the Clarets. The hosts had the ball with Sundire who looked to put Moore in behind, he overhit his ball out to Moore which allowed the Clarets to regroup.

Jeffers got his second of the day from a direct freekick just at the top of the ‘D’ outside the penalty area. Blackwell committed the foul as the Saints looked to get into the penalty area, giving the hosts an opportunity. Jeffers stood over the ball and slammed his effort home doubling the hosts advantage and giving the Clarets a lot to do if they were to get anything from the game. St Albans would continue to probe the defence with Jeffers as their focal point. He brought the attack forward before finding Weiss who fired his effort wide of Ejeheri’s post.

The Clarets had a great spell in the closing exchanges of the game and will feel like they deserved more. Blackwell picked up the ball and took on Moore before hanging a cross up into the box that was met by Lodovica from 6 yards out. He couldn’t get over the ball and his effort went over the bar. Minutes later, the Clarets would come again with substitute Jackson who from the left swung in a cross that was nodded back across the face of goal before landing with Blackwell. With Berry closing the angle, Blackwell could only fire his effort straight at the Saints keeper who made himself big and eventually the Saints would clear the danger.

In the 83rd minute, the referee was left with a decision to make, Lodovica picked up the ball running in behind the Saints defence and made his way towards goal. St Albans keeper Berry comes well out of his box in an attempt to clear the danger. Lodovica beat him to the ball, knocking it round the keeper as he looked to pull one back. Berry, in his attempt to get the ball, took out Lodovica with the referee awarding the freekick to the Clarets but somehow only brandishing a yellow card to the Saints keeper in what could’ve proved to be a pivotal point in the game. The resulting freekick was taken by Blackwell who picked out Lodovica in the area, but the Clarets striker didn’t connect well with his effort and headed over.

Blackwell looked to start another opportunity for the Clarets this time linking up with substitute Esan. Blackwell picked up the ball deep on the right-hand side and clipped a ball over his defender into Esan. He controlled the pass, turned, and looked to fire an effort at goal. The ball was always rising and never troubled Berry. It would be Blackwell and Esan involved again into added time as the latter struck at goal. His powerful strike was saved but not held by the Saints keeper, but Blackwell couldn’t get there to poke the ball into an empty net.

The Saints would come in search of another goal deep into added time as Jeffers won the ball in the middle of the park. The goal scorer picked up possession and ran at Winfield with Banton in support. Jeffers slid the ball across to Banton who has the ball taken off his toes at the vital second by the recovery run of James. The ball ends back with Jeffers who fires over. The Saints skipper would eventually get his and St Albans third in the 97th minute. His initial effort was kept out by Ejeheri but at the second time of asking Jeffers made it 3.

It was an afternoon to forget for the Clarets who struggled to test Berry and the Saints defence for periods of the game. A Jeffers hattrick saw the Clarets fall to back-to-back defeats on the road despite having chances in the game that they could look back on. The potential turning point came late on with the referee only cautioning Berry for his challenge on Lodovica as he looked pull one back for the Clarets with many behind the goal asking for the keeper to be sent off. 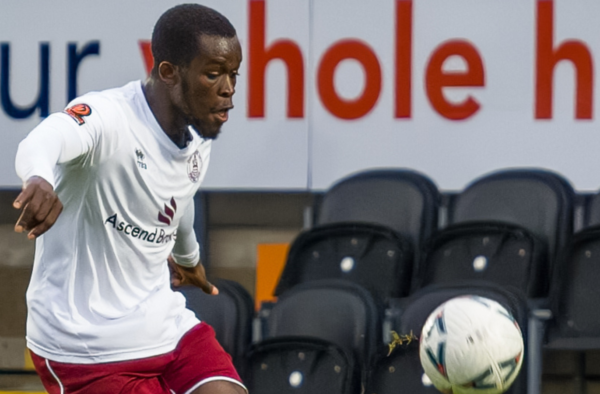 An excellent all-round performance saw the Clarets take all three points home from West Sussex. First half goals from Yearn… 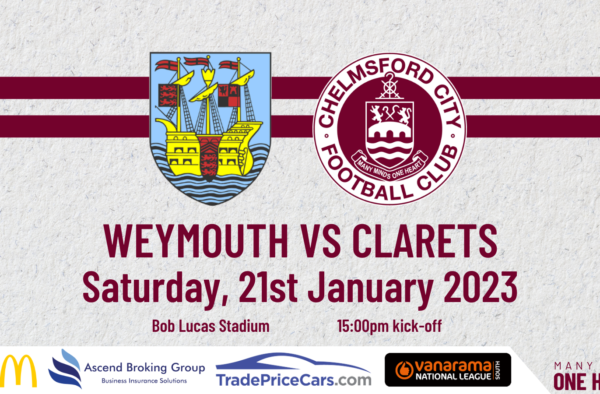 Ticket details for the visit to Weymouth in the Vanarama National League South. Tickets are now available to be…