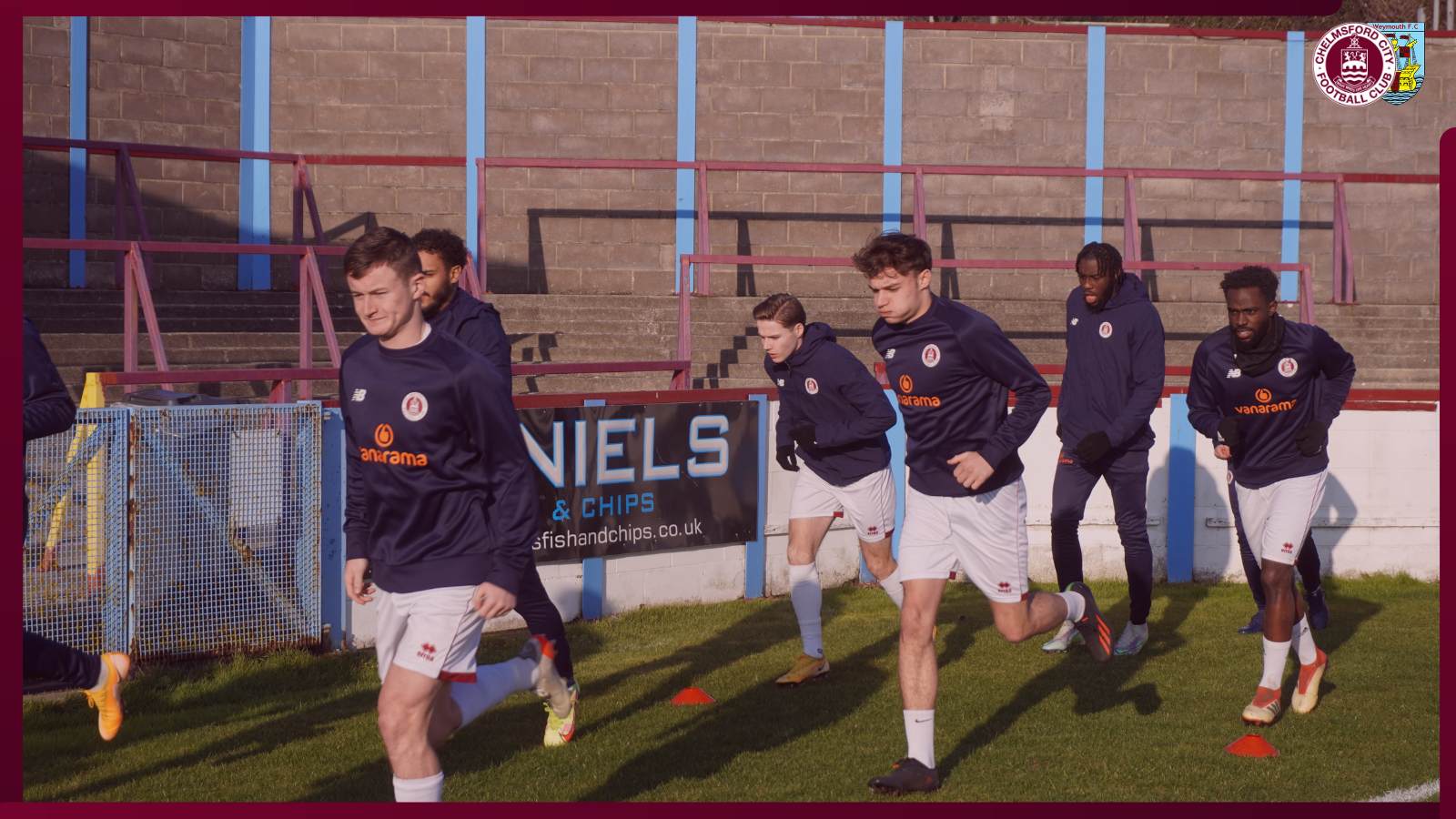 The Clarets travelled down South and to Weymouth where one of the leagues strugglers looked to be an obstacle for Robbie Simpson’s men. A weak first half performance was luckily put away as the Clarets came back to Essex with all 3 points. Weymouth was hard done by as late drama at the Bob Lucas Stadium saw pandemonium break out in the away end, with just minutes to play. Their hard-fought performance resulted in nothing, whilst the Clarets were in jubilation.

After a midweek fixture with league leaders Ebbsfleet, rotation was deemed necessary. Both Jamie Yila and Cameron James had not survived the clash with Ebbsfleet unscathed, and both carried minor knocks, so neither were in the starting line-up. Their replacements were the returning Eduino Vaz, who made his 50th appearance for the Clarets as well as Callum Jones who has impressed in recent weeks. Cameron James had to settle with the bench where Freddie Hockey also made a return. Alongside those 2, Khale Da Costa, Simeon Jackson and Harry Lodovica were all waiting in the wings, ready to make an impact.

In a surprisingly sunny Dorset, the game got underway. Many National League South games and been postponed but the pitch at Weymouth seemed to be in decent condition. The Clarets started well, and Eduino Vaz got a golden chance to get some space and swing a cross in but was tugged back and fouled. Nathan Carlyle swung his hand across Eduino’s chest and sent the fullback down, resulting in an early yellow card for the Weymouth man. Nothing came from the resultant free kick. Weymouth got themselves a great chance early on as Keelan O’Connell found himself in acres of space on the left hand side. He played a good ball across to Ahkeem Rose who took on a first time effort and forced Eddie Beach in to a fabulous save, all be it with his face. The game was very end to end, with Weymouth coming forward well and looking to break through. Chelmsford, on the back foot, would look to do the same.

The next chance once again fell to the Terras, as once again O’Connell caused problems for Chelmsford. He got past Jazzi Barnum-Bobb and the retreating defender managed to turn behind for a corner. The Weymouth winger took the corner, only for it to be returned to him, where he cut inside and took on a shot, curling towards the far post before Eddie Beach dived across and saved well. 5 minutes later, Chelmsford had a chance of their own. A long Zaki Oualah goal kick was met by the head of Dave Winfield whose header deflected towards Callum Jones who headed Reece Grant through on goal. The striker remained cool, calm and composed slotting his shot under Oualah and in to the back of the net, to make it 1-0 to the Clarets, with just under half an hour played. Immediately from the restart, Weymouth were so close to levelling as the ball once again fell to Rose in the box, but Beach got across to produce and outstanding save to keep the Clarets in the lead. After his goal at York, Eduino Vaz looked to try his luck again but his effort was easily saved. Weymouth came forward in numbers once again and O’Connell put a good ball in and Bradley Ash looped his header up and over Beach, and in for the equaliser. Weymouth celebrated as they got back in to the game. Weymouth kept their same intensity up to end the half, but could not break through before the half time whistle.

Weymouth started strong again in the second half, as Ahkeem Rose once again got another chance, but dragged it wide of Eddie Beach’s goal, causing no threat. Chelmsford came close next, as Arjanit Krasniqi managed to get his shot away, taking multiple deflections before, somehow, not making its way in to the back of the net. That chance was soon forgotten as the Clarets were back defending again. Rose once again had an effort, saved by Beach again. Less than 60 seconds later and it was Bradley Ash causing problems this time as he managed to get his shot off, only for it to deflect off Dave Winfield and out for a Weymouth corner. In an attempt to change the fate of the game, Robbie Simpson turned to his bench, on the hour mark. Tom Blackwell made way for Harry Lodovica, who was on to call some problems for the Weymouth defenders. Harry’s height and physical presence was a good option to implement from the bench. After nothing had come off since the sub, Robbie made another.

Arjanit Krasniqi made way for Khale Da Costa, seeing Kai Yearn drop deeper to play beside Henry Ochieng. However, the game was still in the hands of the hosts as they had plenty of chances to score, with efforts blocked by Vaz and Winfield, before the ball could be cleared up field but only back to the Weymouth defenders. Chelmsford did look to break forward with the ball finding its way to Henry Ochieng. He looked to go forward but was pulled back by Tom Blair, seeing him enter the referees book, with just under 10 minutes to go. Then, the final Clarets change happened, seeing Reece Grant, scorer of the first goal, come off to be replaced by Simeon Jackson. With minutes to go, a golden chance fell the way of the veteran striker.

Oualah sent his kick long, and Dave Winfield was once again on hand to fire his header forward. Callum Jones hooked the ball forward and towards Francis, who seemed to have it under control before slipping, presenting the ball at the feet of Khale Da Costa. Khale had his effort saved by Oualah but the ball fell back to him. He squared it to Simeon Jackson who fired his effort through a crowd of players and in to the back of the net. Fans in jubilation, Fez’s on heads, you just had to be there. Every player celebrated with the fans, a late Simeon Jackson goal had secured a vital 3 points for the Clarets. 2 of the 3 subs, Da Costa and Jackson, linked up to seal the 3 points. With 2 of the substitutes getting involved, Lodovica had too. The ball broke well for him and he aimed for the corner. He did not make it as Rees pulled him to the ground and gave away the free kick. Having already been booked, the Weymouth man was given his second yellow and his marching orders, rubbing salt in the wounds for Weymouth. The free kick was clipped over and would be heading for a corner, before the referee brought the game to a close. The Clarets had battled hard and got there in the end, to take all 3 points back with them to Essex. 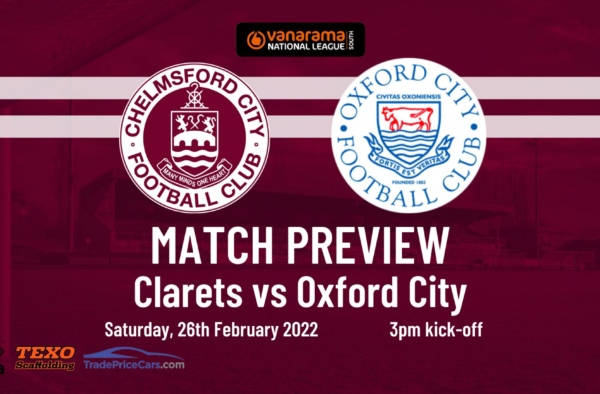 Chelmsford City Football Club are hosting a Football Camp on Wednesday 15th February and registration is now open!  The details…