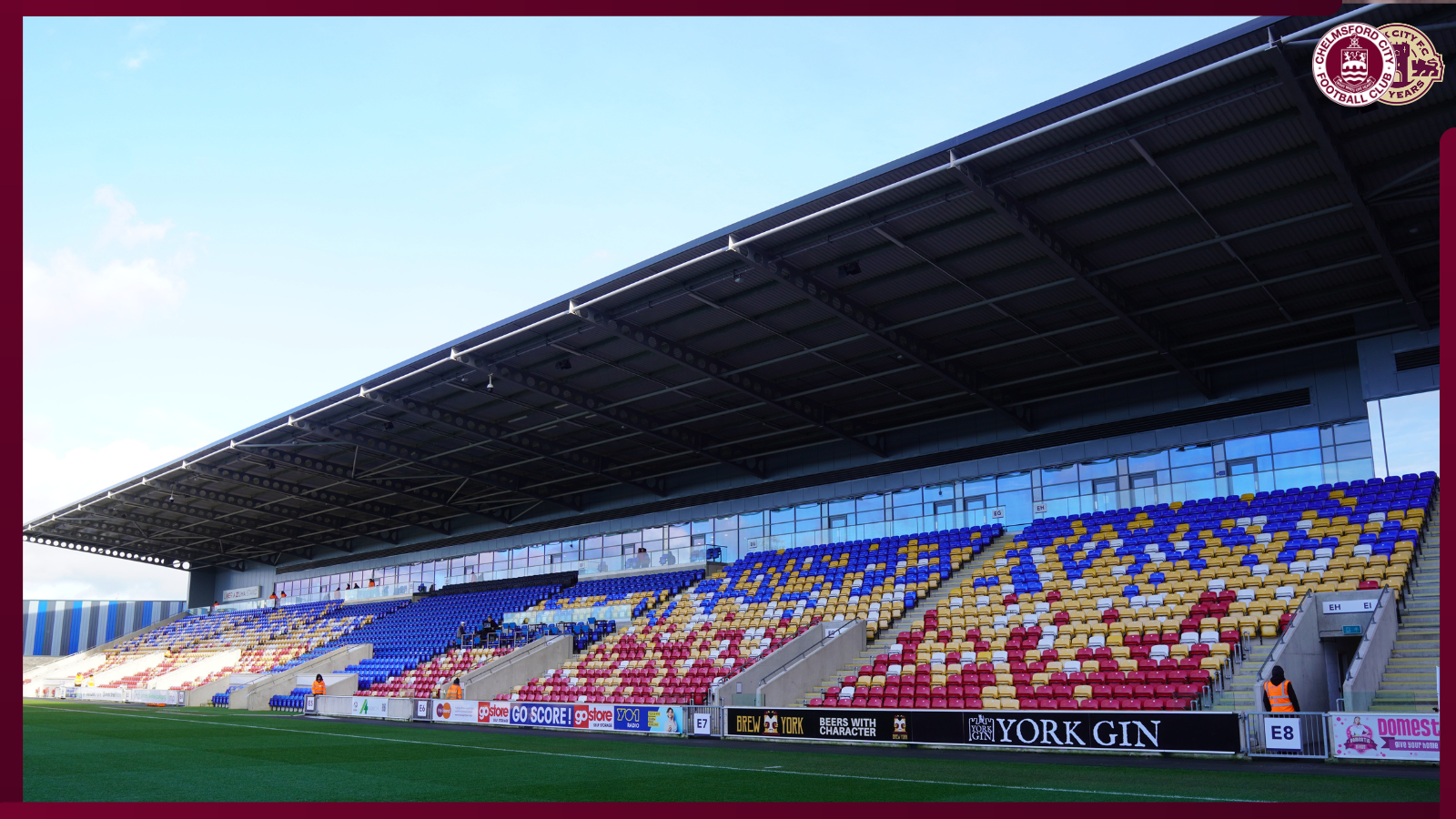 The Clarets travelled north, for a long trip to the LNER Stadium where National League side York City awaited. There was a surprise name on the scoresheet, with a certain left back bagging his first ever goal for Chelmsford. Whether it was a shot or a cross, they all count! Ultimately, a valiant Clarets performance was not rewarded after they took York all the way to penalties, where the Minstermen came out on top. The games are coming thick and fast however with 2 away trips coming up as Ebbsfleet and Weymouth are on the horizon.

After Monday nights 5-1 win, 9 changes came to the starting XI with hattrick hero Callum Jones and Cameron James being the only 2 players to keep their places. Announced on Friday, new loanee Eddie Beach was drafted in between the sticks, for his debut. He had Dave Winfield, Frankie Terry and Eduino Vaz in front of him, with Cameron too. Liam Trotter and Henry Ochieng partnered in midfield, with Arjanit Krasniqi being cup-tied. Callum Jones was joined by Reece Grant, Tom Blackwell and Harry Lodovica, all who looked to continue their good form and cause problems for the York City defenders. Kia Yearn, who re-joined the Clarets on loan from Cambridge this week, was named on the bench and will look to change the game if Robbie needs him too.

Chelmsford were on the back foot to start with as Alex Hurst started brightly and put a good ball in to the Chelmsford box, towards Nathan Thomas. He beat Eduino Vaz but turned the ball wide of the target. The Clarets did get themselves a few opportunities with Harry Lodovica being sent through on the left, where he fizzed the ball across goal. The ball was too far from his teammates in the box and the ball went out for a goal kick. Lodovica was involved again but it was Callum Jones’ cross this time which narrowly went over Harry’s head after Chelmsford continued to push for the breakthrough. Jones did have an attempt moments later after Cameron James won back possession and Jones got good space but failed to hit the target as the ball went wide of Ethan Ross’ goal. York then got a great chance, as there was some confusion between Terry and Winfield, seeing Manny Duku clean through on goal. He attempted to slot it under the keeper, but Eddie Beach got down well and made a great save to deny the striker.

Just before the half an hour mark, the hosts took the lead. Alex Hurst did well to find some space on the left and he delivered well, once again, this time finding Olly Dyson who steered his header goalward, beating Beach. The 2000+ home fans erupted as their players celebrated. There were no clear-cut chances for the next few minutes until, City left back Eduino Vaz got time and space on the left and his cross turned into a shot as it flew over everyone, including Ethan Ross, hit the woodwork and nestled into the back of the next. In his 49th appearance for the Clarets, Eduino scored his first goal, and what a goal it was. Not long after play resumed, Henry Ochieng found his way in to the referee’s book, the first of the game. He flew in on Dan Pybus and caught his man, bringing him down and seeing a pause in play. The number 15 was rather lucky as he seemingly pulled out of the tackle and did not run the risk of further injuring his opponent.

Eddie Beach was forced into action once again with just 5 minutes to go in the half. Shaqai Forde got some space and set himself and fired his effort goalward. Once again. Eddie Beach was up to the task as he got low and tipped the effort round the post, going out for a corner. The corner amassed to nothing, but the Eddie Beach action did not stop there. After some good footwork from Nathan Thomas, he got a shot away and could only force Beach into a save, seconds before a total of 4 minutes were added on. The only action of injury time saw Olly Dyson give away a foul and see himself booked, before the resulting free kick came to danger. The referee brought a close to the half, with the scores level in Yorkshire.

The second half got underway, with the conditions ramping up. The wind caught up and nearly caught out Eddie Beach as Mitch Hancox tried his best Eduino Vaz impression, seeing his cross rattle the underside of the bar and bounce away from goal, luckily for the Clarets. Chelmsford continued to defend and goal scorer Vaz turned goal stopper as he threw his body on the line, blocking Hurst’s effort, before the ball was cleared. The onslaught continued as the next chance saw Shaqai Forde stray through on goal, but with a bouncing ball, he could not get enough on his attempt to lob Eddie Beach, hence it was futile. Eduino Vaz once again found himself having an attempt on goal, with a free kick opportunity. Blackwell and Vaz stood over the free kick with the latter firing goalward but only to see the ball whistle inches past the post. They had a free kick of their own to defend next as a ball clipped in fell to Forde who fired goalward and, if it weren’t for some superb defending would have scored. The effort was bravely blocked by Frankie Terry who did enough to deflect the ball on to the bar and out for a corner.

After the corner came to nothing Forde had another effort. He picked the ball up, whilst some way out, drove into the space and took aim, only for his effort to fly over the bar and into the York fans behind the goal. The national league side continued to flood forward this time with Nathan Thomas who did not pose a threat and dragged his effort wide. Robbie then turned to the bench, brining Kai Yearn and Jamie Yila on, replacing Tom Blackwell and Harry Lodovica, with half an hour to go. The next chance fell to Chelmsford and Callum Jones as the ball dropped at his feet from a corner, but he was only able to fire his effort past the post. A rare second half effort for City who were doing most of the defending. Robbie made his final change with just under 10 minutes to play, seeing Reece Grant leaving the field, to be replaced by Simeon Jackson. The Clarets kept up their attacking form in the closing minutes with Kai Yearn whipping in a good corner, meeting the head of Dave Winfield who could only head wide. York was next up as Manny Duku was extremely close to Hancox’s cross but just could not connect with it. With 3 minutes added on, arguably the best chance of the game would arise. Simeon Jackson fed a perfectly waited ball through to Liam Trotter and the midfielder fired a great effort, force Ethan Ross into a stunning save. Nothing separated the sides at the final whistle, meaning penalties awaited the LNER Community Stadium.

Simeon Jackson stepped up and had his effort saved: YCFC 1-1 CCFC

5 perfect penalties for York, partnered with a good save from Ethan Ross saw the Clarets bow out of the Fa Trophy after a well fought effort from all the team. City rightly should hold their heads high after, yet again going toe to toe with a team from a league above. 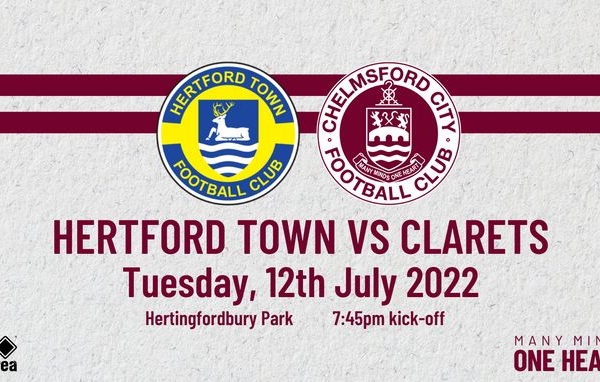 Ticket details for our away trip to face Hertford Town in our second preseason friendly. The kick-off at Hertingfordbury… 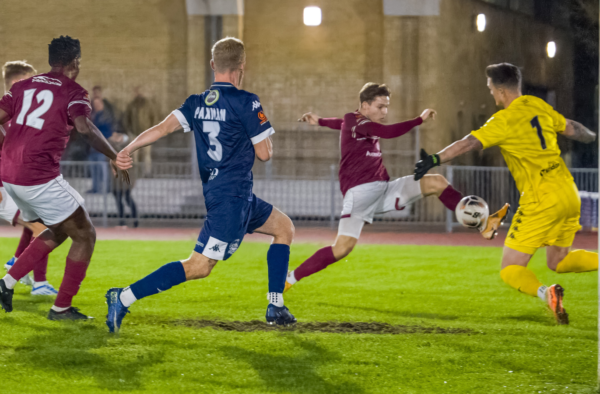 Robbie Simpson’s Clarets held to a goalless draw against Dover, despite having chances throughout the tie Early shouts for a…