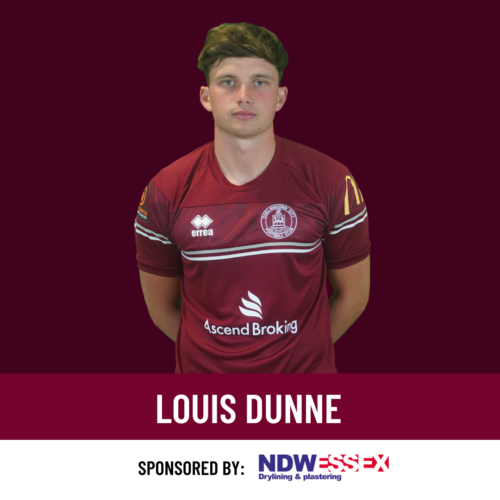 Louis Dunne joined Chelmsford in late April 2021, signing a one-year contract. The 23-year-old midfielder began his career with the current Sky Bet League Two side Colchester United. Having joined Colchester’s academy at the age of eight, Louis made his debut for the U’s during the 2015/16 season. During a 3-3 draw with Wigan Athletic in March 2016, the midfielder was introduced as a second-half substitute and during the following month, he was awarded a starting spot against Burton Albion. At the beginning of the following season, Dunne made a handful of appearances for Vanarama National League South side Concord Rangers during a one-month loan. Another loan would follow in January 2020, with the son of former Colchester player and manager Joe Dunne joining Southern League Premier Division South outfit Farnborough. In the summer of 2020, Louis left the U’s and returned to Farnborough for the 2020/21 campaign. In January 2022, Dunne signed a contract to keep him with the Clarets until the end of the 2022-23 season.