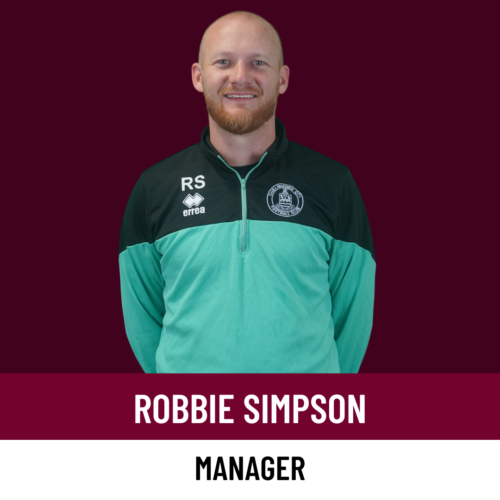 Player/Manager Robbie signed for City as a free agent in August 2019 after leaving MK Dons at the end of the 2018/19 season.

Robbie has had a fruitful career in the Football League, featuring for the likes of Cambridge United, Coventry City, Huddersfield Town and Exeter City.

He began his youth career with Norwich City without making an appearance for the first-team. After his release, he signed for Cambridge City where he stayed for 4 years scoring 33 goals in 118 appearances for the Lilywhites.

His performances caught the eye of Cambridge United in June 2006 where he stayed for 1 season. Despite a knee injury hampering his playing time, he was still able to score 17 goals in 33 appearances.

Coventry City took a chance on Simpson ahead of the 2007/08 season where he stayed for 2 seasons.

Throughout his career he has also featured for Brentford, Oldham Athletic, Leyton Orient, Cambridge United for a second spell and most recently MK Dons, whom he helped gain promotion back to League One last season.

He was appointed as Interim Manager late Janurary 2020 following Rod Stringer’s departure. After going unbeaten in 4 from mid-February, without losing at home, “Simmo” was appointed as the Club’s new permanent First Team Manager in March 2020.