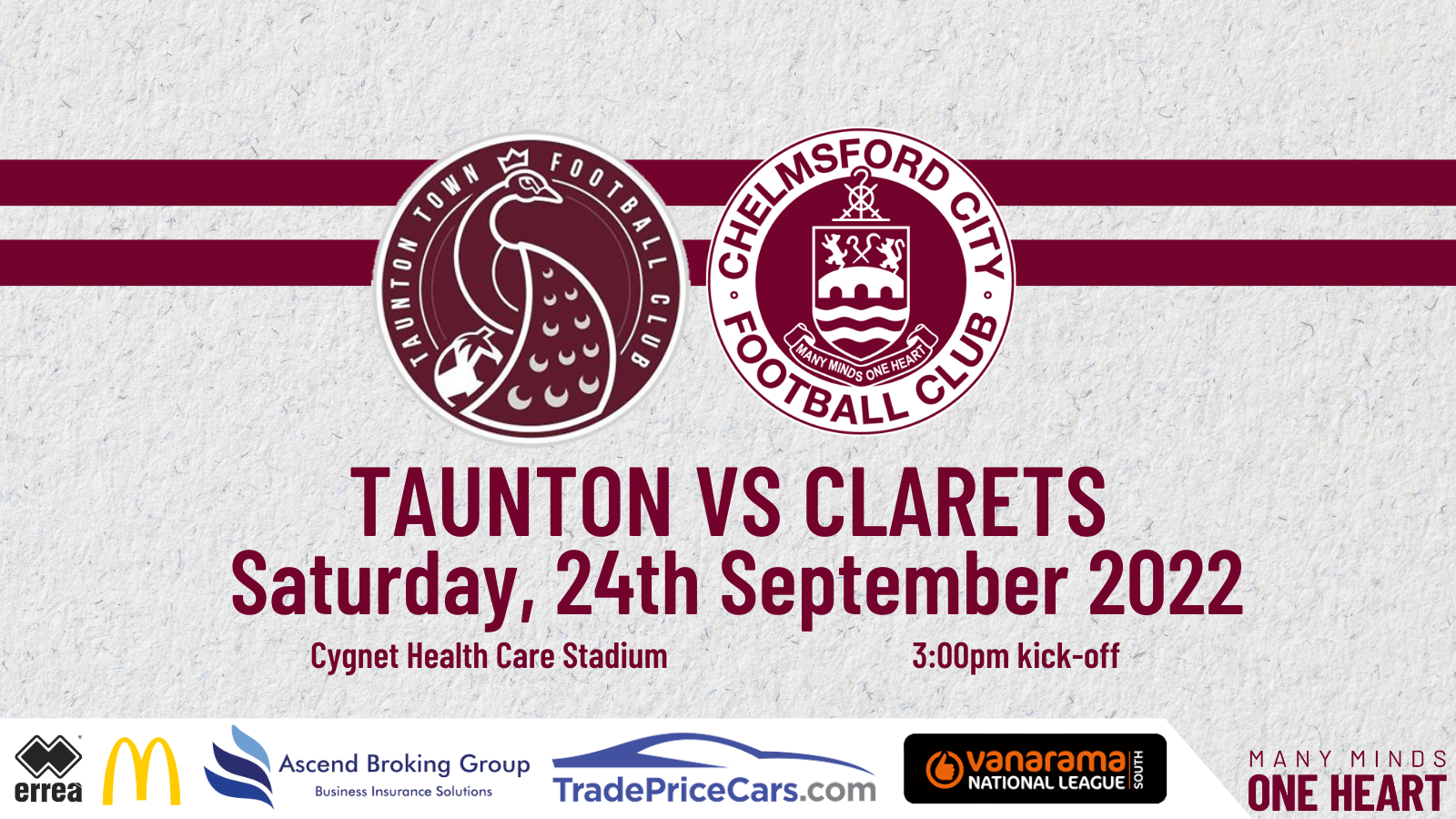 Battles between teams from Taunton and Chelmsford have normally been fought of late on the cricket pitch, but now football takes centre stage as Chelmsford City restart their Vanarama National League South campaign on Saturday 24th September (3pm kickoff) with an over 400 mile round-trip to Somerset to face newly-promoted Taunton Town.

Chelmsford have had an excellent start to the season with just 1 defeat in 9 games played in all competitions so far. Their league form has shot them into the playoff positions, with 17 points from their opening 8 games, which sees them in 4th place in the nascent Vanarama National League South table. They also progressed handsomely in the Emirates FA Cup last weekend against Southern League Kings Langley but now face a week with 3 tough away fixtures.

Taunton have made a good start to their first ever season at Vanarama National League South level, the highest level they have ever played in their history. They sit in 12th place after 8 games with the Cygnet Stadium definitely being a fortress for the Peacocks as they have not lost at home so far. They have defeated Dartford and Chippenham at home and they have held Welling as well as beating Laverstock & Ford in the Emirates FA Cup last Saturday. In fact Taunton have only lost once at home since last August in all competitions, and that was in the Southern League Cup so they are on an unbelievable 22 game unbeaten league game run on their own patch. Away from home this season it is a completely different story, they have only defeated Hungerford, but lost to Concord, Farnborough and Slough and drew at Clarence Park against St Albans 0-0.

Taunton have been promoted twice in their last 3 completed seasons, and the season they didn’t get promoted they finished 2nd in the Southern League, and then losing out in the semi-finals of the playoffs to Poole Town so they have been on an upward trajectory in recent years.

A notable thing which differentiates the two teams this season. In Chelmsford’s 9 games so far, 27 goals have featured (19 for, 8 against) whereas Taunton’s 9 games have only featured 12 goals (7 for, 5 against) so the prediction for this one will be an interesting one to make.

In terms of players, in goal they have Southampton loanee Jack Bycroft who saved a 90th minute penalty last Saturday in the FA Cup so there wouldn’t be a replay against Wessex League opponents Laverstock & Ford. In defence they have former long-serving Bath defender Dan Ball, as well as former Chippenham full-back Jay Foulston who scored against the Clarets for the Bluebirds back in September 2019 at Melbourne Park. In midfield they have former team-mate of Chelmsford manager Robbie Simpson at Exeter and Leyton Orient, Lloyd James, who also played for Southampton and Colchester United. They also can field Lee Lucas, who has appeared for both Swansea and Motherwell. In more attacking players, they have Ross Stearn who has scored against Chelmsford 5 times for 4 different clubs; Weston Super Mare, Bath (twice), Sutton and Chippenham spanning from 2012 to 2020. Up front they have former Chippenham and Southend striker Nat Jarvis as well as former Weston and Bath target-man Nick McCootie. They also have Harry Warwick who scored against the Clarets last season whilst at Chippenham.

Manager Rob Dray, who took over in 2018 from Leigh Robinson, said after their narrow FA Cup win, “The important thing today was just getting through it. First half left a lot to be desired, second half we were better as they tired but credit to Laverstock & Ford as it was their cup final. It was the worst we’ve been this season. We won and that’s all that matters, winning games of football is the philosophy that I’ve always done. Looking ahead to Chelmsford, they’re in the playoffs at the moment. We have to be a lot better today for a start which we will be. We’ll train Tuesday and Thursday. We’ll be back against Chelmsford with a better performance because they won’t be easy.”

The sides have only faced each other once recently and that was in November 2016 in the 3rd Qualifying Round of the FA Trophy. City were two leagues above Taunton at the time but a stubborn resistance from the men from Somerset looked like it was going to cause a replay. However in the 89th minute a long throw from Chris Bush caused confusion and captain Anthony Church touched in the winner. City eventually progressed to the 3rd round of the tournament that season but were knocked out on a replay by now Football League side Tranmere Rovers.

Chelmsford have had another week to get some players back from injury and manager Robbie Simpson shuffled his pack with good effect against Kings Langley, with for example Jamie Yila coming in for his first start and scoring 2 goals so Simpson once again has a headache in terms of selection. Jazzi Barnum-Bobb missed the FA Cup win so could be back in the squad but with 3 away games in a week, all squad members will be required. Callum Jones remains a long-term absentee with his fractured ankle.

Admission is payable by card or cash at the turnstile only, and tickets cannot be purchased online in advance.

*Under 14s are free on condition they are accompanied by an adult.

To get to the Cygnet stadium, take the M4 and M5 and then leave the M5 motorway at Junction 25. Take the exit off roundabout signposted Taunton (A38). Go straight over first roundabout, keeping in left hand or middle lane. Continue along the Toneway and keep straight on at the four-way traffic light junction until reaching a roundabout where the left hand lane should be taken onto Chritchard Way. Stay left and take exit at traffic lights, then go straight ahead at traffic lights immediately after. Continue around the corner into Wordsworth Drive and the ground is on the left.

There is no Supporters Club coach for this fixture.

Parking
There are two car parks at the Cygnet Health Care Stadium. The main is car park 2 at the front of the ground adjoining the road is for spectators while coaches for visiting teams should be parked at the far end of the car park after receiving guidance from a club steward.

The inner car park situated on the left of the stadium behind one goal (Car Park 1) is currently unavailable as a car park and is restricted for use by matchday refreshment providers or by any other parties subject to prior agreement by the club.

Disabled parking spaces are located immediately to the left of the main turnstile.

Turnstiles
Pedestrian access to the stadium is via the turnstiles which are clearly signposted and located on the end of the stand at the front of the ground. Normally only one turnstile is open but this will increase to two depending on the nature of the game and anticipated crowd numbers. The third turnstile is located at the entrance to the inner car park and is restricted for use by Taunton Town FC Season Ticket Holders.

Entrance to the ground for wheelchairs, mobility scooters, pushchairs etc is via the pedestrian gate adjoining the vehicular entrance upon display of a valid match ticket. Any requests or concerns regarding access for disabled spectators should be emailed to the club.

All four sides of the stadium have either covered seating or covered terracing:

The stand adjoining the main car park The Tom Harris Stand has 261 public seats, a Directors Box with 27 seats including reserved seating for visiting officials. There is a wheelchair viewing area in this stand.

There is terracing at either end of the stadium which is in place for its entire width. The mid-section of terracing is covered at both ends.

The opposite side to the main entrance has the Taunton Plumbing & Heating Stand  with 95 seats. Terracing is in place to the right of this stand stretching down to the corner while the stadium surround to the left consists of hardstanding in front of the clubhouse and boardroom. Another disabled viewing area is located to the left of the stand by the media gantry.

Temperature on Saturday is set to be a mild and pleasant 16 degrees for the 3pm kickoff but with almost 20mph wind gusts. 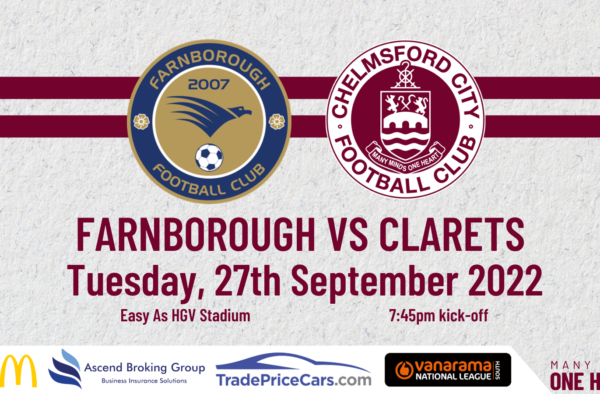 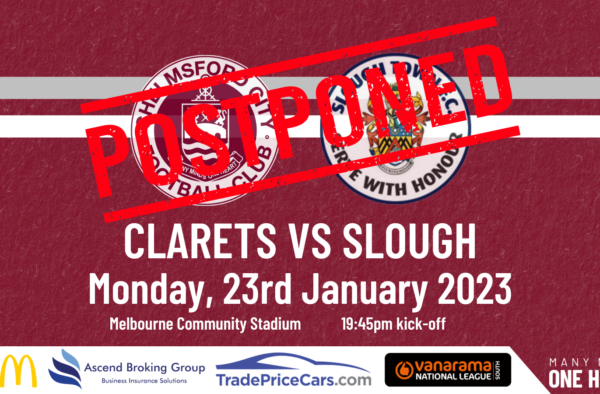