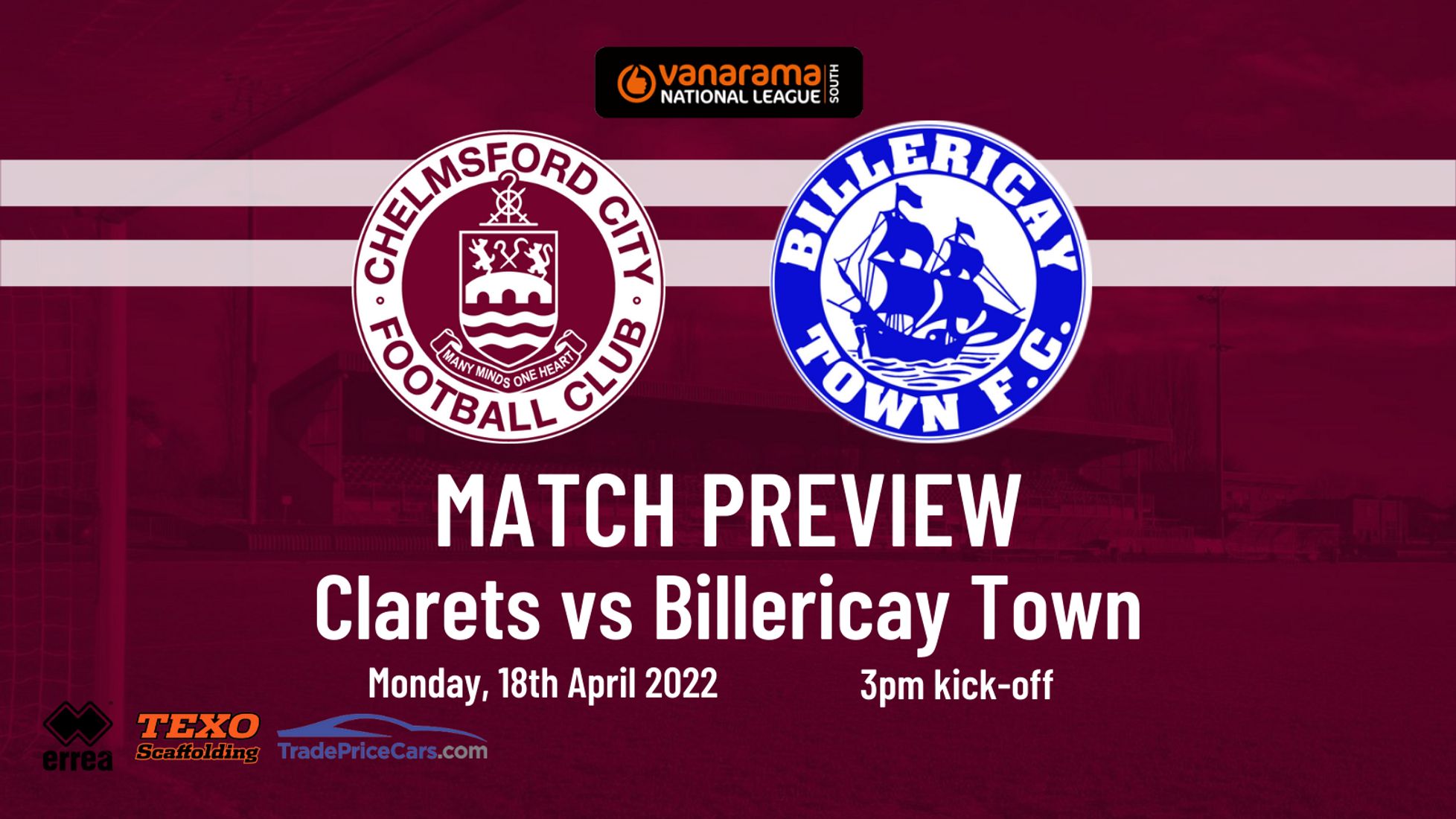 City go into this fixture on Easter Monday looking for back-to-back wins following the dominant performance at St Albans City on Good Friday.

Friday’s 3-0 win extended Chelmsford’s unbeaten run to three games as they moved into 18th in the table ahead of Bath City, who themselves earned a credible 0-0 draw at home to Havant & Waterlooville.

A win for City tomorrow could take them above Braintree Town and Tonbridge Angels into 16th if other results go their way, and 9 points clear of our visitors with four games left to play.

This Essex Derby will also be the first time the Clarets have hosted Billericay at the EMG Inspire Stadium since Monday 2nd September 2019, where the sides shared the points in a 1-1 draw.

A goal six minutes into the second-half from former City captain Anthony Church was cancelled out by Moses Emmanuel for the visitors as the Blues were able to hang on with 10 men.

With the deadlock yet to be broken in the first-half, both sides were in need of some inspiration, which eventually came in the form of Billy Knott’s left foot.

The midfielder won a free-kick after being fouled by Callum Kennedy, before his resulting ball in found the head of Church who powered past Alan Julian.

Ricay were then reduced to 10 men with just over 20 minutes left to play as Louis Ramsay received a second yellow card after a foul on Frazer Shaw.

This didn’t seem to phase the visitors however, as a mere two minutes later, they were back on level terms after Emmanuel was played through on goal before finishing well past Carl Pentney.

With 5 minutes additional time, Knott curled a free-kick just over, before Mickey Spillane attempted the spectacular with an effort from 30-yards-out firing just over the bar in what proved to be the last of an action-packed Essex derby.

Tickets are now available to be purchased in advance of the 3pm kick-off and can be bought by clicking this link. Please be aware that tomorrow’s game will not be segregated and further ticket info can be found here.

A stellar performance from the Clarets saw Robbie Simpson’s side sink St Albans City in a 3-0 victory at Clarence Park.

Following a quiet opening 15 minutes of the game, the Clarets took the lead from a Tom Blackwell corner.

With a Charlie Sheringham header having forced the corner in the first place, the striker was the man to rise highest in the box for the resulting delivery to head home.

Just over 10 minutes later another set-piece for the Clarets teed up a header to double Robbie Simpson’s side’s lead.

A quick free-kick from Louis Dunne led to Blackwell and Matt Rush linking up down the right before the former crossed in for Cameron James to head in the second.

St Albans’ first real effort of the game quickly followed the goal, with the ball coming to David Noble on the edge of the box before his lasered shot was deflected over the bar.

The game’s next big chance saw Sheringham go just inches away from adding his second as a pinpoint free-kick into the box found him six yards out but the frontman couldn’t make contact to send the ball in.

Minutes on from the restart Shaun Jeffers had an early chance to pull one back but Kai McKenzie-Lyle made a stretching save to prevent his shot from inside the box.

Following a spell of pressure from the Saints, Dunne added the Clarets’ third goal on the hour mark following an unbelievable run and spectacular finish.

The midfielder picked up a loose ball in the Chelmsford half before driving down the left in Gareth Bale-esque fashion before dinking a delightful finish over Michael Johnson.

Three minutes on from there and the City clean sheet was maintained by an excellent McKenzie-Lyle save following a Jeffers strike on the turn from the edge of the area.

From that point on, some astute defending from the Clarets restricted St Albans to half chances and seeing out the clean sheet meant the game ended in a 3-0 win against the play-off hopefuls.

Billericay Town currently occupy 21st position, the only relegation spot this season, on 30 points following one win, a draw and three losses in their last five games.

At the helm is Jody Brown, who has previously coached at Grays Athletic, Welling United, Concord Rangers, Heybridge Swifts and Dagenham & Redbridge.

The Blues experienced a difficult start to their 2021/22 campaign, picking up one point in their opening four games in August against Bath, Eastbourne Borough, Maidstone United and Braintree.

Their first league win of the season came on October 9th in a 2-1 win away at Dulwich Hamlet, which was followed up by another 2-1 win the following weekend at home to Slough Town.

Outside of league action, ‘Ricay made it to the third qualifying round of the Emirates FA Cup this season. Their first task was an Essex derby against Braintree in the second qualifying round, winning 2-1, before exiting the competition at the next stage away to Havant & Waterlooville in a 3-2 loss.

The Blues were also unfortunate not to progress in the Buildbase FA Trophy this season as they were given a tricky tie away to Maidstone in the second round. The game finished 1-1 after normal time, and had to be decided with penalties as the Stones triumphed 6-5.

Our visitors’ opposition dangerman would appear to be striker, Dylan Gavin.

Gavin, 19, joined the Blues on loan from Sky Bet League One side Charlton Athletic in January 2022 on an initial one month loan, which was eventually extended to the end of the 2021/22 season.

The loan has proved to be a successful one for both parties as well, with the striker finding the back of the net 8 times in 14 appearances in all competitions.

It was also Gavin’s sensational strike from 30-yards-out in the first-half that secured his sides 1-0 victory in the BBC Essex Senior Cup.

The Clarets were held to a 0-0 draw against Billericay Town despite threatening the Blues’ goal on a number of occasions at New Lodge.

In a first half in which City comfortably shaded the chances, the first fell for the hosts as Jack Munns struck wide on the turn from inside the box four minutes in.

Robbie Simpson’s side responded quickly though, and Chez Isaac had a chance to put the Clarets in front but toe-poked an effort from close range narrowly wide.

The best chance of the half fell for Simeon Jackson after Dara Dada struck the ball towards him before the Club’s top scorer spun well and drilled a one-on-one chance just wide.

With the chance to take the lead spurned, the two sides went in at the half-time break with the game goalless.

City looked like threatening at the beginning of the second half, too, with an Adebola Oluwo header dropping narrowly wide from a corner.

Ten minutes later and the Clarets would again threaten Lovett’s goal, Jackson the man firing a deflected shot wide after racing into the Blues’ box following a long ball forward.

Dada was next to have an effort, with his dipping and swerving strike from distance almost fooling Lovett before the stopper recovered to beat the shot away.

Fifteen minutes from full-time and City finally had the ball in the back of the net after Oluwo finished Dave Winfield’s header across goal from a free-kick, but the linesman’s flag was up to chalk it off.

Billericay then went close to opening the scoring just minutes later, as Femi Akinwande raced forward before firing his effort from inside the box straight at Jacob Marsden for the ‘keeper to beat the ball away.

The hosts would again force Marsden into a save five minutes from time, Kweku Lucan this time dribbling beyond Oluwo before shooting at the City ‘keeper.

Neither side was able to threaten either goalkeeper again and the game at New Lodge ended goalless. 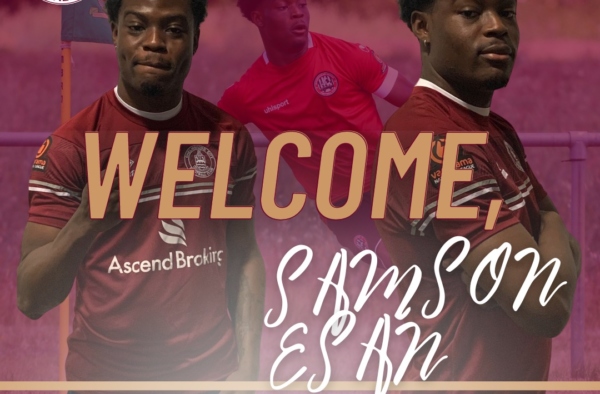 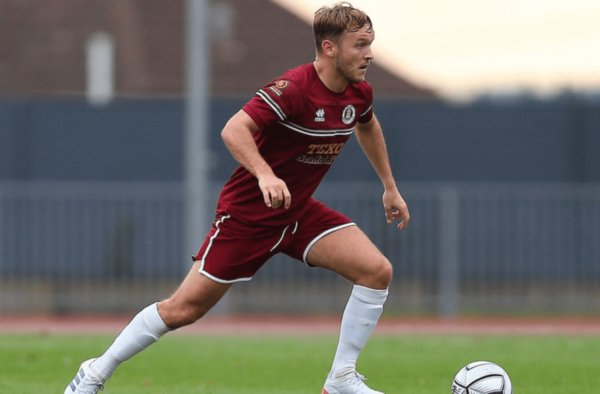