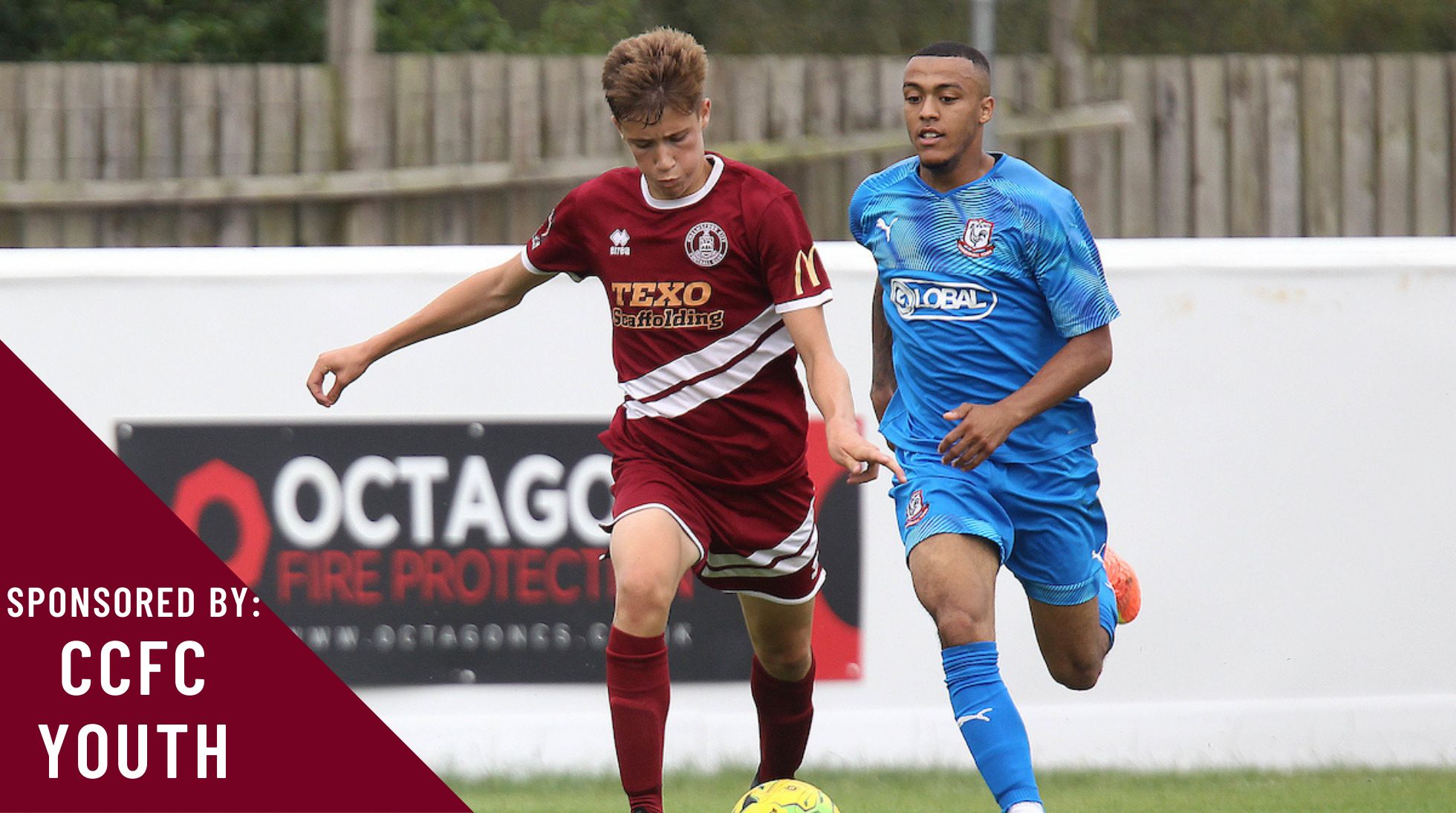 Coming up to a year on from his promotion to the First Team from the Under-18s, Guy Norton spoke to chelmsfordcityfc.com.

Having trained with the senior side towards the end of the 2019/20 campaign, the now-18-year-old left-back agreed terms with the Club in May last year.

Since then, the young defender has enjoyed several appearances for the First Team and also departed on two loan spells to bolster his experience.

While recollecting his step up to the senior team, Norton explained: “I was with the 18s and I noticed that a couple of people were getting promoted to the First Team for a couple of training sessions.

“I was thinking to myself, ‘Oh, am I going to get the chance to play with the First Team, even to train with them to prove what I can do.’

“There was one more training session before the season ended and the Manager, Greg [Wise], he rang me up and he said, ‘You’re going to go training with the First Team tonight.’

“I must have shown Robbie what I could do. He spoke to me after the session and said, ‘You’re a good player, you’re one for the future, good feet, good crossing.’

“The season ended and I was doing my own stuff, just training down the park in the summer and then, the next day, my phone rang. It woke me up at like nine o’clock and it was the Under-18s Manager saying, ‘Robbie really liked you,’ and they wanted to give me a contract and sign me. I was taken back by it because I was half asleep!

“He gave me Robbie’s number and Robbie rang me a couple of days later and we discussed what the circumstances were with a contract, what his plans were for me and stuff like that. It took off from there really.”

Norton’s journey in the game began at Sunday League level, though. Having grown up in Wickford, the left-back started out with a team called Essex Royals before being scouted by Leyton Orient.

Having been picked up by the London outfit at the age of nine, Norton remained with the O’s until the age of 15.

“I joined them when I was nine,” the defender said. “Played up until I was the age of 15 and after that, they got rid of a large chunk of the squad.

“I happened to be in that chunk of the squad. I left there after six years, so a long part of my life was at Leyton Orient.

“When I started off at Leyton Orient, it was like a dream come true – playing for an academy. You think like, ‘Oh, yeah, I’m going to do it. I’m doing really well. I’m heading in the right direction.’

“So, it was just sort of on my own, trying to pick myself up again.”

From there, Guy returned to Essex Royals and trialled with the Clarets’ and Billericay Town’s Under-16s before signing for the Blues.

After half a season with Ricay, though, Norton again found himself being released as the Manager of the Under-16s did not believe he would be ready for the physicality of next age group.

Guy explained: “I took a couple of months out and then I thought, ‘Right, let me go again. Let me go to Chelmsford and see how I like it.’

“Signing for the Under-18s the following season was really good. My confidence went back up. I was playing with the people who were the same sort of calibre as me; they were understanding me.

“The coaches were brilliant; everything was really good here.

“Obviously, stepping into the First Team, it’s a whole different kettle of fish really. It’s quite surreal. I’m only 18 and playing in the First Team but everything is good, the players introduced me well.

“It was just nice, I felt like I was in a home – it’s a little family really.”

Following the defender’s promotion to the senior side, Norton got pre-season under his belt before it was decided that a loan move would be best to speed up his development.

A loan switch to Witham Town would follow before the Isthmian League North Division side was switched for Eastern Counties League Premier Division outfit Brantham Athletic.

“To be honest, in pre-season, I started quite a few of the games and it was a massive step up physically, in the pace of the game and in a way, I don’t think I was quite there,” he said.

“That’s obviously why I went out on loan to gain experience, but I wasn’t quite there, I wasn’t quite strong enough, not quick enough. It was a massive step up from the Under-18s and Academy.

“No disrespect to Witham, they’re a great club, but it didn’t go to plan as much at Witham, so I went to Brantham Athletic in Ipswich. That was much better, the environment was better.

“I played the full 90 every game, so I was getting minutes under my belt, in the tank. Getting fitter, getting stronger, getting used to playing with bigger men than me and it sort of brought me forward.

“Going out on loan, it obviously helps a lot, so I’m just glad to be back at Chelmsford and trying to improve.”

With his first full year in the Club’s senior set-up on the horizon, Norton is loving his time at the EMG Inspire Stadium and feels he has the coaches around him to develop.

“Sometimes you’ve got to pinch yourself because of the players I’m playing with, they’ve all done it, they’re all experienced, they all know what they’re doing.

“Really, everything Robbie says, I try to take on board and see how to improve my game.

“He’ll always help me, even though he was a striker, he still knows every single position inside and out. Obviously, he’s played against defenders at the top, top level.

“It’s just unreal, and surreal. The players I’m playing with, like Robbie as a manager, he’s so good. He always gives information.

“He does get angry sometimes, like with certain players sometimes in a game, but it’s all because he cares so much about the Club and he wants us to push for promotion places so much.

“He’s just a great manager really and all the ex-pros – Elliott Ward and Mickey Spillane – they all help me massively because they’ve all done it. I just take on board everything.

“I ask them all the time, ‘What can I do better? What can I do differently?’ They’ll tell me and I’ll just take it on.”

Having been moved to the left-back position during his youth career, Norton also tries to learn from the careers of players he looked up to as a youngster.

As an Everton supporter, Leighton Baines immediately sprung to Guy’s mind, closely followed by Kieran Gibbs in his Arsenal days before the 18-year-old defender landed on Ashley Cole as inspiration.

With the three Englishmen in mind, Norton divulged what he feels are his own best attributes.

“I like to think I’ve got a good left foot,” Guy claimed. “Also, crossing balls in from deep, getting down the line, getting the crosses into the strikers; like Adam Morgan. That’s what I want to be adding to the team.

“I’ve got an average bit of pace, but I use my head well, I read the game well, so I don’t have to get in a 1v1 with a really quick winger.

“I’ll give them five yards or if they’ve got their back to goal, I’ll get tight to them and try and nick it off them – don’t give them the time and space to try and take me on in a 1v1 and use their pace.

“I like to think I’m a tricky, little footballer because I wasn’t the tallest growing up, so I used to practice all my touches, my dribbling, my awareness of other players.

“I’ll always be working, I’ll always be putting myself about, putting tackles in, winning headers and hopefully, creating goals from left-back from that left-hand channel whipping balls in.”

With his attributes and ability clearly mapped out, the young defender has a wealth of motivation to call on to help him realise his aspirations.

“Of course, it’s always just to keep going and to keep my head down. At the end of the day, I just want to see how far I get in football because I know I’ve got the ability.

“My main motivation’s also my family. My mum, she’s been through a lot, so I just think if I do it for her, it would be a nice, sentimental touch.” 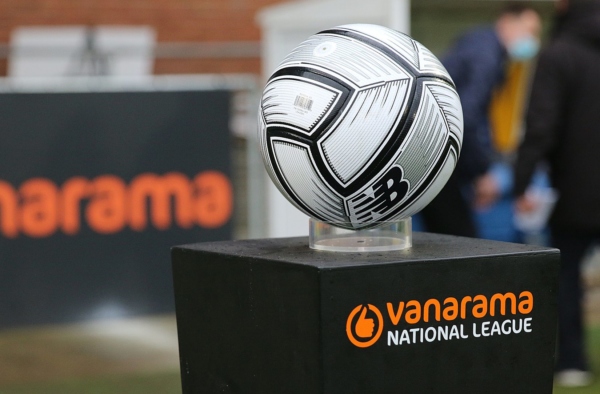 Key dates have been confirmed for the 2021/22 Vanarama National League season across all three divisions. 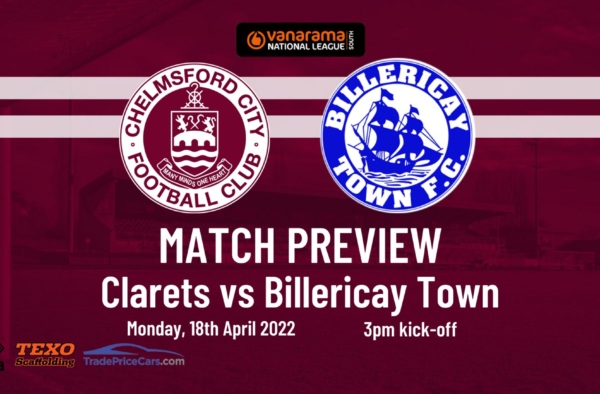